The Wolf in Fantasy by Rahne Sinclair

Regardless of where or what historical epoch a fantasy novel is set, there is a very specific subset of animals usually contained therein, and there is a high chance that the wolf is among them. There is something about the wolf that makes it an enduring part of our myths and legends.  Whether anthropomorphised to a loyal or magical being, or demonised to an evil adversary, this creature has played both hero and the villain in our stories.

Our early hunter-gatherer ancestors invited the wolf to his fireside and utilised its natural abilities to aid in their own survival. Overtime, further domestication and selective breeding turned the wolf into the dog we know today.

Man-kind then turned on its four-legged friend’s wild cousin. Medieval kings were known to offer great reward or pardons for a sack of wolf pelts. They were derided and hunted to extinction in many countries. The last wolf in the UK was killed in 1743. Conversely, many lords and knights would take the wolf as their emblem, signifying their strength in battle, their ferocity, and a warning to their enemies they were not to be tangled with.

As stories and fairy tales began to emerge, this hatred was reflected in the stories told and for many centuries, the traditional role of a wolf in fiction was as the enemy. Little Red Riding Hood was a story that used the wolf to represent the dangers of the forest, as opposed to the safety of the village, but by no means was it the only story to feature a big bad wolf. In J.R.R. Tolkien’s Lord of the Rings, white wolves terrorise The Shire, and the Orcs hang out with Wargs. Maugrim of C S Lewis’ The Lion, the Witch, and the Wardrobe is a shining example of how wolves were thought of as sly, cunning, and ferocious.

As mankind re-learns the truth about this contender for our apex predator status, our perception of wolves has changed drastically in the past few decades, undergoing something of a 360 degree reversal to portray the wolf in a more positive light. Different aspects of the wolf’s personality are focused on. Their pack mentality epitomises some of the aspects of ‘family’. They share child care duties, and are fiercely protective of their young. In books like Jungle Book by Rudyard Kipling, the orphan Mowgli is raised by a she-wolf. In G.R.R. Martin’s Songs of Ice and Fire, the dire-wolves are given as pets to the Stark family’s children, who become companion and protector. Even YA and children’s stories have reflected this new admiration for the wolf. Michelle Paver’s Chronicles of Ancient Darkness show the wolf as a constant companion to the young hero as he battles evil during the Stone Age.

The newest trope for wolves has to be as the ‘love interest’. More accurately, this pertains to werewolves, rather than wolves, and is greatly at odds with its origins in Greek mythology and horror. With TV shows like Buffy and Being Human, the werewolves are still violent and bestial, but their human counterpart is a figure we are meant to empathise with. In Harry Potter and the Prisoner of Azkaba, Remus Lupin is a greatly admired teacher who has to endure his curse. This is countered by Fenrir Greyback in The Half Blood Prince, who revels in his wolf nature. In the case of books like The Southern Vampire Chronicles (True Blood), plus countless erotic fictions, the human form of the werewolf represents the ultimate alpha male character. A character whose is strong, confident, protective and assertive, yet at times gentle and loving.

Similar to its real-world inspiration, the wolf in fantasy is still evolving. Like the best type of hero, the wolf has had a shady past, but is now a much reformed character. 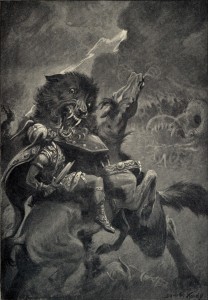