This collection of four novella-length stories concerns the adventures of the scientist and explorer, Dr Ludweg Phinagler as recorded by his faithful-ish (!) chronicler and assistant, Fosse. They are set in the world of the Kinden established in the author’s Shadows of the Apt novels, but again other than understanding the central concept of different types of people with abilities related to a particular animal (usually, but not exclusively, insects) no other knowledge of those books is necessary to enjoy these stories.

They are written in a style that is an obvious allusion to late 19th/early 20th century SFF classics and will be recognisable to anyone who has read for instance, Jules Verne or Arthur Conan Doyle. As Doctor Phinagler searches for the elusive archaeological/historical find that will earn him respect from his less colourful academic colleagues, his singlemindedness and unwillingness to acknowledge danger signs leads him and his unfortunate amanuensis into four perilous, thrilling and utterly entertaining adventures – the latter from the reader’s point of view at least! The four novellas all have their own strong individual and often humorous identities and also incorporate the author’s inventiveness in designing new “kinden” based on his love and knowledge of biology 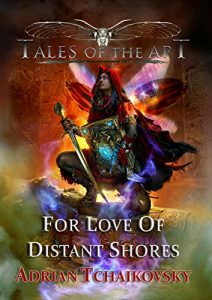 In the first novella, CITIES OF SILVER the intrepid pair find themselves in an underwater dystopia, complete with technologically superior overlords and an oppressed underclass who help the interlopers in their attempts to escape. Anyone who has seen the 1978 film WARLORDS OF ATLANTIS will recognise the plot but it is skilfully reworked and given its own unique flair to make an excellent story that is great fun to read.

The second novella, WRITTEN IN SAND sees the protagonists explore ancient ruins in the desert, rumoured to be protected by shadowy forces. I found myself thinking of this story as “He Who Must be Obeyed” (to misquote from H Rider Haggard’s SHE) crossed with THE MUMMY films.

The third novella, MASTERS OF THE SPIRE is probably my favourite. In this we see the Doctor and Fosse encountering lost tribes in the jungle (as beloved of many earlier writers such as Edgar Rice Burroughs etc) where the story hinges on a very effective use of the particular abilities/biology of the insects that the tribes are based upon (to say more would be a spoiler) and there are some nice macabre scenes and “body horror” in this story which works really well. Add in an Indiana Jones style rival to the Doctor (and potential love interest for Fosse) and I found a lot to like in this story in particular.

The final story, FOR LOVE OF DISTANT SHORES sees the pair embark upon a voyage into uncharted waters. This has three major events including an exciting and gripping battle with a sea-monster (shades of MOBY DICK or JAWS spring to mind) but also tangentially examines some more serious themes such as slavery and the disastrous ramifications of badly handled first contact between indigenous and outsider cultures. For those readers who have read more of the author’s work, this story also links with his Echoes of the Fall series.

As with much of the author’s work, a major strength throughout is in characterisation. The pompous, vainglorious but often charming beetle-kinden, Dr Phinagler and his long-suffering, pragmatic and occasionally manipulative fly-kinden companion, Fosse both have many faults but are also in their own individual ways often admirable as well. The author is clearly relishing the chance to explore aspects of the world on a smaller scale than the grand, world-changing events of the novels. The tone is for the most part much lighter and often tongue in cheek and the prose and comedy are a delight. Like Pratchett, the author excels at the art of effective but affectionate character assassination in a single sentence. Finally, as an unashamed homage to early pulps, a great part of the fun in reading these novellas is in trying to identify and enjoy all the influences and references that have shaped them. An absolute pleasure to read from start to finish!