To say I was excited to get my hands on my copy of Tracy Fahey’s collection “New Music for Old Rituals” would be an understatement. I was pestering the publisher so I could pre-order my copy from the moment it was announced – and was even able to sneakily get my hands on it, the day before it was officially released – And was it worth the wait? Of course it was.

“New Music for Old Rituals” is primarily a folk horror collection, but it is far more than that. Tracy Fahey takes the legends, rituals and superstitions of her homeland and interweaves them into new tales which reflect the horrors, anxieties and sadness that can plague our modern lives. Each tale is prefixed with a photograph taken by Tracy to reflect the concept of the following story. The photographs have a beautiful haunting imagery, and as all of them have been taken within a thirty minute drive of her home, so they truly reflect the hidden magic which can still be found in Ireland. Following each of her tales is a succinct explanation of the history and mythology which has inspired each tale.

The stories that make up “New Music for Old Rituals” are both beautifully written and varied in style. My own personal favourite “The Changeling” was one of the best short stories I have read this year. The story is quietly unveiled by the elderly narrator, making the ending even more horrific and visceral when revealed. Tracy Fahey is a master at lulling you into a false sense of security before revealing the horror beneath. So much so, that by the end of the book, you’re read the stories as if you are in some kind of uncanny valley, everything looks normal, it all seems fine; but you just know that it isn’t quiet right, that everything is just off kilter. 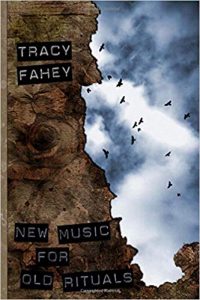 As well as the stories in “New Music for Old Rituals” being beautiful, the book as a whole is a thing of beauty. Black Shuck Books have managed to impart a feeling that the tales you are reading have been handed to you personally, that the book you hold in your hands, may have been someone’s diary or memoir. The Polaroid snaps (with their curling sellotaped edges) and the careful use of the handwritten and Dymo fonts really adds to the feeling that what you have in your hands is a personal retelling of someone’s life events.

The main warning though that this collection imparts, is that it doesn’t matter who you are, or where you live, the horrors and fears which infect us never change. Humanity fears change, it fears the outsider; and you – whoever you are – will always be an outsider.

Tracy Fahey is an Irish writer of Gothic fiction.  In 2017, her debut collection “The Unheimlich Manoeuvre” was shortlisted for a British Fantasy Award. Two of her short stories were long listed by Ellen Datlow for Honourable Mentions in The Best Horror of the Year Volume 8. She is published in over twenty Irish, US and UK anthologies and her work has been reviewed in the Times Literary Supplement. Her first novel, “The Girl in the Fort”, was released in 2017 by the Fennec imprint of Fox Spirit Books. And her new collection, “New Music for Old Rituals” was released in November 2018 by Black Shuck Books.

One Reply to “Christmas Countdown Day 9”