I love The Poet X by Elizabeth Acevedo. I’ve never read a novel written wholly in verse before, so that was a treat, as was Xiomara’s strong, fierce, and powerful voice. I fell in love with Xiomara from the very beginning and was willing her on, wanting her to find a way to voice her feelings and questions, her fears and her experiences of being a young black woman who’s talked over, talked down to, or simply ignored at every turn. This book made me cry, made me cheer, and made me happy to have met Xiomara, a beautiful, brave, black girl. I cannot
recommend it highly enough.

I extra love (!) Passing Strange by Ellen Klages a fascinating and compelling historical love story with supernatural/fantastical elements about a bisexual artist and a lesbian singer. Set in San
Francisco in 1940, it looks at the ways in which queer cis and enby women try to express their queerness and/or nonconformity to the gender binary [sic] while still complying with the law. It’s a tragedy with a happy ending. 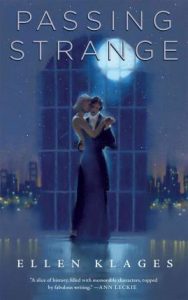 The Green Man’s Heir is EVERYTHING I love about Juliet McKenna’s work:
a skilful, careful, and seamless blend of folklore, mythology, and fantasy sensibilities with a modern setting and modern concerns regarding ecological & environmental issues, masculinity, news reporting, and policing, but without a single moment of hectoring or lecturing. And all wrapped up in a compelling tale that will make you want to read all night.

The Black God’s Drums by P. Djèlí Clark is totally immersive (I read it in less than a day), full of well-crafted worldbuilding (of the alternate Black history kind), intriguing mythology, engaging and well-rounded characters whom I found utterly fascinating, and it was at once exactly the right length (for the story it told), but far too bloody short (because I need more, more, MORE (please!) about Jacqueline and Captain Ann-Marie of the airship Midnight Robber.

When the Letter Comes by Mx Sara Fox is a story about magic, growing up, being left behind, becoming someone different, with a transgender protagonist whose younger sister gets invited to go to magical school while Henry (she hasn’t decided on a new name yet, but she will one
day) is left behind. Then a war comes, and Henry meets Caden, who’s non-binary and who brings Henry to where her sister Gabrielle is involved in a war between those who think technology is destroying magic, and those who don’t. And all the time Henry is struggling to feel comfortable in her skin, to accept who she is, and struggling with others, particularly her parents’, difficulties with accepting who she is. This is a beautiful, compelling short story that gripped me from the first line.