We can still be wolves

So long ago, Vikings ruled the world. Vikings fought to remain true to themselves, even when stronger powers invaded their own land and transformed it into something else than home. Vikings fought until they had to change, until the fight left them. And that story is one to remember, when anger and vengeance transformed into resilience, except for the few who just refused to follow the herd. 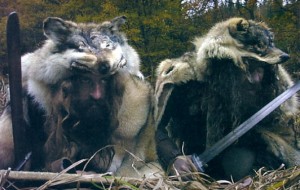 In my Vijka, when the line draws in the sand, one viking’s soul cuts in two. He finds a monster hiding within himself, playing in his head, eating at his heart. And then the monster becomes stronger, bigger than him. And so a war begins, with its powerful need to destroy everything until nothing remains, the monster makes him forget about being human. The monster consumes him, like fire.

Even if everything burns and everyone dies, even if nothing’s left to conquer, this monster waits for the end. It feeds on this anger and hate and  power; it feeds on the viking’s soul. And then the monster, its spirit, never truly goes away; it lives on as part of humanity, of History. We are vikings, we are Vijka.