When the editors of European Monsters asked me to contribute a werewolf story to the collection, I was over the moon. The idea of a book dedicated to dark, unsettling monsters appealed to my dark side – just as I’m sure it will appeal to the dark side of many readers. The initial brief was simple – to write a werewolf story that went back to the monster’s ‘roots’. A story about something frightening, monstrous and disturbing. Something unsympathetic, unromantic and unredeemed.

I have been a fan of werewolf fiction for a long time, and, in my other life (www.shewolf-manchester.blogspot.com), I’ve done a lot of academic research on werewolves in medieval and contemporary popular culture. I guess that might be one of the reasons why Jo and Margret asked me to tackle lycanthropes for European Monsters! So I put my thinking cap on and went to work on my story…

… but there was a problem. That word – ‘unsympathetic’ – kept nagging at me. Werewolves are definitely frightening, either in terms of encountering one or in terms of transforming into one. They are certainly disturbing and monstrous as well – at least most of them are. But are they unsympathetic? Have they ever been unsympathetic? Can we strip back the last few years of sparkly vampires and brooding shirtless teenwolves to find something more primal? Something that recalls a huddled mass of ancient ancestors, staying close to the campfire and trying to make sense of the howls of their lupine adversaries in the darkness?

The short answer is: no. Aside from didactic Christian texts (for instance, Inquisition handbooks and treatises on the devil), most literary and folkloric stories present the European werewolf as a sympathetic monster. That’s not to say all werewolves are ‘good’ or ‘noble’, but rather that the myth of prehistoric fireside stories of fearsome wolves stalking the forests is exactly that – a myth.* But like all short answers, this fact reveals a much longer answer that provided the inspiration for my story, ‘Nimby’. 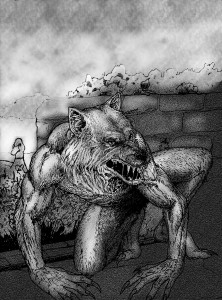 Given that we have no evidence of what ancient humans actually talked about around their fires, we have to look to literature for the earliest versions of the European werewolf. I’m going to skip over the first couple of millennia, if that’s okay, and jump to the first real ‘golden age’ of werewolf fiction: the late Middle Ages. Two of my favourite werewolf stories originate from this period: Marie de France’s Bisclavret and the Middle English William of Palerne (a translation of the Old French Guillaume de Palerne, but I think the translation totally outshines the original).

The werewolves in these stories aren’t hideous beasts that prowl the forests waiting for innocent travellers to eat (though Marie hints that some werewolves do this, just not her hero). They are civilized, aristocratic men who, due to circumstance and feminine malevolence, are forced to adopt the form of a wolf and abandon their former homes until they can find a cure. These men are tortured and miserable souls, cursed by the wicked women in their lives and perpetually grieving for their lost humanity. The possibility that they might lose the last shred of this humanity and become a snarling monster is never very far away.

But these men are victims. They are lost to a curse that is beyond their control. A Freudian might suggest that they are symbolic of the ‘beast within’ – the uncivilized and animalistic id that continuously threatens to overwhelm the more socially acceptable ego. I prefer to think of these medieval werewolves in terms of the cultural changes that were occurring when these stories were written: programmes of deforestation and urbanization (which had begun centuries earlier but became more sustained in the late Middle Ages) were ‘civilizing’ the wilderness, new genres of literature (particularly the romance) focused on nostalgic longing for a more innocent past, and organized wolf-hunts had set in motion a project that would eventually see native wolves hunted to extinction in many parts of Europe. Under these circumstances, werewolves are created as a romanticized reminder of a more rural, wilder past. These wolves belong to the forest, even at a time (especially at a time) when both wolves and forests were beginning to be systematically destroyed.

Skip forward a few centuries, and we can see the descendants of these romantic, sympathetic werewolves in contemporary fiction and film. Many werewolves are still victims – the innocent hiker whose only crime was to forget to stick to the road, the young man feeling the weight of his bloodline forcing him to change into something he is not, the embattled underdog who fights the oppressive vampire. (I’m leaving female werewolves out of this for now, because… well… that’s a whole other story…) Even in the most gory, bloody horror films, we still have sympathy for the werewolf. It’s not his fault he’s a monster! He’s trying his best to control it!

Of course, when presented with such a long history of sympathetic, romantic – even noble – werewolves, the temptation obviously is to try and subvert it. ‘Nimby’ is the second story I’ve written about an unsympathetic werewolf. In my earlier story, ‘Home’ (coming out in another anthology soon), I set myself the challenge of making a truly unlikable, powerful and unpleasant werewolf, in contrast to a helpless, innocent, sympathetic vampire – but that’s the opposite way round to the usual power dynamic between these supernatural creatures. You can read a bit more about my choices for ‘Home’ here (http://hannahkate.net/out-now-undead-memory-vampires-and-human-memory-in-popular-culture-peter-lang/).

For ‘Nimby’, I decided to take a different approach. I made a list of all the common characteristics of sympathetic and romanticized werewolves and thought about the potentially negative consequences of each one. Given my fondness for medieval werewolf romances, I ended up settling on the werewolf’s strong relationship to land (and forest). Lots of fiction and folklore has focused on the territorial nature of the werewolf. Others continue to link the wolf with a nostalgic image of the pastoral, pre-cultural, uncivilized wilderness. This sort of werewolf is the very opposite of progress, development and change.

And the more I thought about it, the more unsympathetic (and unlikeable) I thought that would be – I actually quite like progress and development, and territorialism is seldom a pleasant trait. That was when I first saw the werewolf who would become the main focus of ‘Nimby’, and the story began to take shape. I’ll warn you now – this werewolf doesn’t stalk the huddled masses around the campfire; he doesn’t pick off hikers on the moor; he doesn’t belong to a pack; and he doesn’t even howl at the moon. But I humbly submit him to the (admittedly small) ranks of thoroughly unpleasant and unsympathetic lycanthropes. And I hope you dislike him as much as I do.

* In his 2009 book, Wolves and the Wolf Myth in American Literature, S.K. Robisch calls this the ‘campfire myth’. This is a great book and I thoroughly recommend it.