I love Halloween. I love masks and mayhem and all the whispered promises of the coming winter. So this year we have a Halloween tale by the utterly marvellous Tracy Fahey. 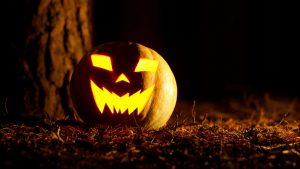 Grandma’s Tale: The Girl Who Loved A Ghost

It was dark outside, dark as only autumn can be; a velvety midnight blue sky, no stars. Vivian shivers and draws the curtains. Inside, the sweet peat-smoke from the open fire warms the air. Grandma stands, stirring the pot of stew on the stove. From time to time she hums; an abstract, repetitive little melody.

‘Just over to Tommy’s.’ Vivian can read the unspoken question. ‘We’re picking out our trick-or-treat outfits.’

‘Yeah.’ Vivian is surprised. ‘We always do it in Dublin.’

Grandma looks at her steadily. ‘It’s a dangerous night at the best of times, but more so in the country than in the city. There you have precious little of the old ways left; it’s all bright lights and new inventions. The Good Folk are nearly gone from that place.’

‘But here they’re still strong. And never more so than on Samhain.’

‘You call it Halloween. But it’s just a shadow of the ancient festival of Samhain.’ Her voice has taken on that familiar cadence, low and strong. ‘It’s the time of great power for na Sidhe, the Good Folk, the fae. They’re at their most devious then, during that time when the veil between the living and the dead grows thin.’

Vivian is fascinated. ‘So people stay indoors then?’

Grandma looks at her seriously. ‘They do, child.  Sure your own grandfather’s family know well what can happen if you don’t.’

‘The MacArthurs?’ Vivian is intrigued. Her grandma seldom mentions the infamous MacArthurs.

‘Yes. I could tell a story about them…’

She doesn’t need to say any more. Vivian grabs her grandma’s hand. ‘Tell me.’

The Girl Who Loved A Ghost

A long time ago, way back further than you or I could even imagine, hundreds of years ago, your grandad’s family lived in the Big House in the village here. They were a proud, haughty family that didn’t mix with the villagers. They charged a hard rent, they cared not one bit about the ordinary people. All bar one of the family, that is. There was a girl, Nora, a few years older than you. Nora was her name. Her mother was dead, and her father was often absent. Her older sisters were fine ladies who went to balls in Dublin and wore dresses made of the finest silks.

But Nora was different. She liked to roam around the countryside by herself. She spent her days watching birds, picking flowers, eating berries from the hedges. ‘You look like a beggar,’ said her sisters with scorn. But Nora didn’t care.

One autumn day when she was on her travels, she met an old woman carrying a bag who was trying to cross a river. The water was low, but the old woman moved stiffly, afraid of overbalancing.

‘Let me help you.’ Nora was a kind girl. She took the old woman’s arm, and steered her across the ford.

‘Thank you,’ said the old woman, once they reached the other side. She put her hand in her bag and pulled out an apple.

‘Thank you,’ said Nora, always pretty-mannered, and raised it to her lips. It was a lovely apple, shiny red like blood, and its warm scent smelled like summer. The old woman raised a hand.

‘Don’t eat it now,’ she said. ‘Leave it in your pocket, and only bite into it if you’re in danger.’

It was an odd thing to say. Nora watched the old lady until she reached the bend of the road. A wind swirled up and carried the leaves from the ground into a twirling stream that blotted her from view. When Nora looked again, she was gone. She shrugged, and went on her way, the apple in her pocket.

The next day was  Samhain. Now all the local people knew that this was a dangerous time. On Samhain the dead go walking. The new dead can come home, but only for one night. So to this day, on that night we light candles in the window to see them home, we set the table to entice them in with food, we sweep the floors and make the house neat for their return.

But Nora knew none of this. It was a beautiful late afternoon and she wanted to go walking. So as the servants were cleaning the house, and getting out the candles, she slipped away into the fields.

When she got to the river, she half-expected to see the old woman again, but there was no-one there. Only the setting sun reflected in the shimmering water. She stopped for a moment to admire the sky streaked with orange.

‘It is beautiful isn’t it?’

She jumped. Beside her was a young man, his face pale and sad.

‘I am James Blackwood. I live near here,’ he said. ‘Would you like to walk with me?’

And so they walked together as the sky above them darkened and the breeze grew still. Even the birds stopped their chirruping. A blank silence settled over the landscape.

And as they walked they began to talk. Nora, who had never thought about boys before, decided she liked this young man. He talked of nature, of the foxes he’d seen late at night, cavorting like dogs at play, of the beauty of cherry blossom trees shaken by the wind, scattering their confetti over the ground.

And when he put out his hand, she took it. His hand was cold, but she didn’t mind; her own hand warmed his as they walked.

‘Would you like to visit my family?’ he asked.

‘Yes,’ she said, and smiled at him. They walked up a twisting path into the hills, a path she hadn’t walked before. It grew darker and the stars peeped out, pale at first, then dazzling against the blackness of the sky.

‘Is it much further?’ she asked. Her legs were tiring now.

‘Not much further,’ he said, and held her hand tighter. It was too dark now to see, but he walked along, surefooted, and she followed. Eventually he stopped.

With that, the moon rose, and in the silvery light she saw that she stood, not in front of a house, but a cemetery. Within the ancient gates she saw a large tomb with the word ‘BLACKWOOD’ engraved on it.

And then she grew cold and afraid because she knew that the young man beside her was not one of the living. She stepped back, and as she did so, the apple bumped against her leg. |She remembered the old woman’s words: ‘Leave it in your pocket, and only bite into it if you’re in danger.’ Trembling, she took it out and bit into it. It tasted sweet as honey.

As she bit into it, there was a thunderclap and a fizz of lightning and she saw she was alone. Nora turned and ran down the hill, all the way home to where the candles glimmered in the windows of the Big House.

And so, because of the kindness she showed that old fairy woman, she was saved. But for many nights after she wandered down to the river, hoping to see the pale young man again. For beside him, every man seemed ordinary and humdrum. She never married, and to the end of her days she remembered that night, the night she fell in love with a ghost.

‘And that, my dear Vivian,’ says Grandma. ‘That is why we don’t go out in the darkness on Samhain.’