Haralambi is an old friend of Fox Spirit and I was delighted when i saw his name among the list for this volume, because this last year, more than ever it is nice to remember the connections we have. – Sentimental Aunty fox.

Lessons in Shapeshifting – A hala, a Podcast and a Questioning Protagonist.

I feel incredibly delighted and privileged to have been invited to Eurasian Monsters as I believe the work Fox Spirit Books has done with this series of coffee table anthologies is important. Who gets to talk about monsters and how they shape our understanding of legends and folklore, plus we all like a good creature feature. Popular culture has its favorite monsters, which I’m not here to mock or dismiss, because I have been greatly influenced by vampires, zombies and mermaids when coming up as a writer.

At the same time, human imagination has concocted some really insane monsters that are lesser known in wider circles. That’s why Margrét Helgadóttir’s work on this anthology series is essential – here you’ve a small registry of stories based on regional creatures written by people from within, so you get to see intimate reinterpretations of their history and how it’s contextualized. Also, it’s a lot of fun to examine your cultural legacy (I’ve been doing more of this work in recent years) and see how it fits with the present. Or doesn’t.

For me at least, there’s a definite disconnect between the lives we lead in Bulgaria and the folklore we once created. Much similar to how deforestation and lawless construction in national parks have severely impacted local ecosystems and endangered native species – our cultural ecosystem hasn’t been welcoming to its own cryptids. Where would these creatures go, if they existed today, and how would we view them?

This was the starting point of my story “Nine Tongues Tells Of”, which describes the relationship and the long conversations between my protagonist and a newly-emerged hala (a shapeshifting spirit of hail storms). The story is as much a commentary on how we commodify every aspect of our lives (the conversations are released as a podcast) as it is a questioning of what we have forgotten. Just as my protagonist is clueless about the hala, so was I initially, apart from its apparent connection to hail. My research was fueled by the intention to do it right; represent the hala correctly. The definitive hala, if you will. 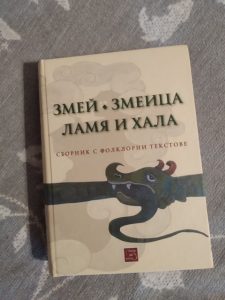 In consulting with the big compendium of folkloric knowledge about the zmey, zmeitsa, lamya and hala, I discovered how rich and decentralized the understanding of what the hala is and what it could be. A reminder that oral knowledge easily differs from place to place and ultimately encourages the freedom to retell. It’s very fitting that stories and beliefs about the hala are as varied and changing since the hala herself is a shapeshifter.

My hala is one of many. Far from definitive, yet still true to her nature.