While we endure the real life horror of processing delays and our book being out of our hands, we thought you’d enjoy another blog posts from one of our amazing contributors. 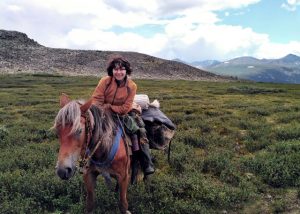 This is what my summer job looks like: I’m just a cook but I have a very different workplace. My kitchen, house and everything else that may be needed, are tied to the saddle behind my back. Because here, high up in the Altai Mountains, there are no roads and almost no people: there are only mountains and taiga. I’ve been working here every summer for over twenty years, and I still haven’t had enough. 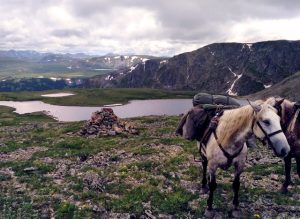 This picture was taken at Bagatazh Pass, on the first day of a two-week trek. I have just told the tourists that mountain spirits live here. This place seems deserted but ancient Masters dwell here, and they are not human. For the time being, everyone thinks it’s just funny. But in the evening, when it gets dark and everyone gathers around the fire, and fog crawls down from the pass to the camp, the tourists will feel odd. To calm them down, I will tell them that the creatures that reside here don’t show themselves and never pay attention to people. 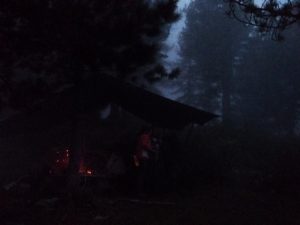 Karina Shainyan grew up on the island Sahalin in the Far East of Russia, before she left to study psychology at Moscow State University. Karina has worked as a school psychologist, journalist, and editor. She says “I composed my first horror story when I was five, sitting in a closet with my best friend. It had such a strong effect on him that my parents scolded me for a long time. But I liked it anyway. As I got older, I started writing down my stories, and then it turned out that quite a few people wanted to climb into my closet and become scared”. Karina has written seven novels, including Долгий путь на Бимини (“Long way to Bimini”), Западня (“Trap”), and С ключом на шее (“With a key around my neck”). She’s also published about a hundred short stories, in magazines like Если (“If”) and Реальность фантастики (“Reality of fantastic”), in Кетополис (“Ketopolis”)—a mosaic novel composed of short stories by many authors, united by the pseudonym Грэй Ф. Грин (Gray F. Green)—and in anthologies such as Предчувствие Цветной волны (“Premonition of the Colored Wave”), Новые мифы мегаполиса (“New Myths of the Metropolis”), and Бомбы и бумеранги (“Bombs and Boomerangs”). Find out more about Karina at her Facebook page: https://www.facebook.com/karina.shainyan