The monsters lurking under Billy’s bed when he was small were real, also not so much lurking as hanging out. Now some of them travel with him in a backpack and when he meets two sisters with a serious supernatural problem Billy’s backpack makes him something of an unlikely hero.

Billy would be an ordinary sixteen your old boy if his best friends in life weren’t monsters from under his bed.

Scarlett wants to be an ordinary sixteen year old girl, but her life is on hold thanks to her younger sister, Hester. 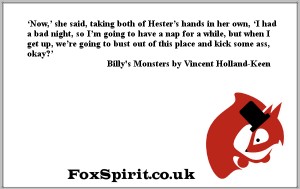