Hello! I’ve been on holiday in America. It was great. There was sunshine, and weather, and food that had flavour and health in it and EVERYTHING. Here’s a graphical representation of every single piece of publishing news since I got back. 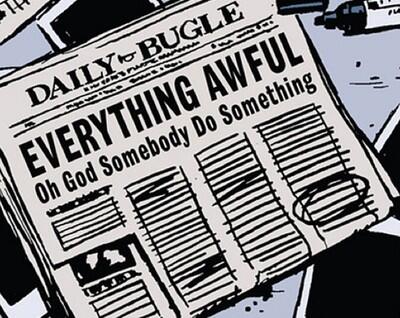 You’re not a Smiths fan are you?

In no particular order; Amazon and Hachette are doing their best Godzilla vs King Ghidorah impression with massive civilian casualties, Angry Robot has closed Strange Chemistry and Exhibit A and may be up for sale, massively successful authors whose livelihoods depend on traditional publishing have decided an Open Letter is a devastating debating strategy no one’s ever tried before and a group of massively successful indie publishing authors responded with that equally terrifying new rhetorical weapon; the online petition and a study has found author earnings now at ‘abject’ levels.

It’s not just on an industry level either. Anecdotally, pretty much every writer I know is deeply unhappy right now. The AR issue has a lot of people with homeless books, a lot more people twitchy about whether their books will make it to market at all and dealt a real blow to the YA scene in this country in particular. Likewise, there’s a lot of people in Beta reading, or with manuscripts out with folks, who are desperately worried nothing will come of it. Then there are the people still trying to get agents, or sales, the people trying to sell short stories and somewhere in there, God bless ’em, the nonfic folks like me.

It’s tough, pretty much, all over. Some people have a steady income doing this, certainly but for a lot of authors this has been a shitty year.

You know the temptation to write ‘Good luck everybody! See you next month!’ here is almost overwhelming, right?

So what the Hell do we do? Cry? Drink heavily? Bemoan our fates? Sit on the floor? Sad stories? Death of kings? LOTS of cake?

Yep. Any or all of the above.

Then get back up and keep going.

There’s a song by Laura Hocking, inspired by the magnificently titled pulp novel Loves of a Girl Wrestler. One line has been rattling around in my head for weeks now.

Although I may be flung, boys

I doubt I will be floored.

Now, in the context of the song it has about three levels of meaning but the one that really jumps out at me is perseverance which brings me back to the title. It’s the Manx national motto, something old friend Clara Barker reminded me of yesterday. It means:

Withersoever you throw it, it will stand.

That, in turn, puts me in mind of the secret of Judo; get thrown 7 times, get up 8 times.

Being a creative of any sort right now is miserable and requires a constant tightrope walk between fear of no one seeing your work and fear of your work being hijacked by the supernado of outrage Twitter often seems to be. It is incredibly easy to turtle up and do nothing for fear of offending people. It’s even easier to lose faith in your abilities altogether and go passive.

Give in to the fear and the sadness and the frustration. Hell, you want to go hog wild? Roster some time to be INSANELY jealous of people you know who do better than you. Write it all down, be as articulate and grouchy as you want to be. And then? Save it somewhere non-public and get on with your day.

But before you do all that? Do one other thing.

Set a timer. Give yourself a 15 minute pity party.

Odds are you’ll be bored in ten.

When you are? Get back to work.

There are two steps out of this rut. One is accepting your feelings, processing them and moving past them. The other is doing the work. And by the work I don’t mean same as it ever was either. Try something new, something you’ve never done before. It may not work but here’s the thing, if you don’t try it? It DEFINITELY won’t work.

I’ll even show you mine. BBC4 is reshowing Edge of Darkness which is, to my mind one of the best pieces of British TV drama ever made. I’m blogging an essay about each episode and when the show’s done, I’ll throw in a couple more and put them out as my first Kindle single. I have absolutely no idea whether it’ll do a damn thing or sell a single copy. I do know that if it stays in my head, it definitely won’t sell.

There’s no easy way out of this, and everyone’s solution is different. But for me, right now, the solution is to put this stuff at my back and get some work done. Let me know what works for you and see you next month.