Looking Into the Black Mirror

In terms of Cult TV, Channel 4 has always been where it’s at for me. From some of my favourite comedies – the overblown horror of ‘dreamweaver’ Garth Marenghi’s Darkplace and the smutty delight of Pets – to dark dramas such as The Fear, featuring an incredible central performance from Peter Mullan, Four has always been my number one stop for my viewing.

The stand-out series in recent times, in my opinion, has to be Charlie Brooker’s superb Black Mirror. I’ve always been partial to loosely-linked one-off shows like this, having grown up on a steady diet of The Ray Bradbury Theatre, Tales from the Crypt and The Outer Limits. But from its first episode – the gut-wrenching dark comedy of The National Anthem – I was hooked in. Here was a series that left me asking questions every single week, not just of the world around me but also of myself. Fifteen Million Merits asked just how far reality TV would go, something that often revolves around my own mind – where is the bottom of the national obsession with these constructed realities? Be Right Back addressed a commonly-explored theme – namely, would you bring you loved ones back from the dead, given the chance – with a technological slant. Even more powerful, to me, was White Bear, something that took this formula even further – namely, punishment for crimes as a form of national entertainment. Does the sentence go to far, or is it possible to argue that the punishment fits the crime better than even our own justice system? 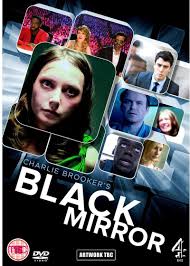 And while these are clearly nightmarish scenarios, a little part of your brain tends to think – would I do the same thing, in that situation? And would it truly end any differently? By turn thought-provoking, intelligent, and grimly amusing, I can only hope that we’ll get a third chance to stare into the Black Mirror and see what lies behind it. Because what really made this show stand out above many of its dystopian counterparts is that each episode felt so believable. There was no sense of looking, hundreds, or thousands of years into the future – each felt like a glimpse into a future that could be here sooner than we think.