Moiron struggled to his feet and stumbled across 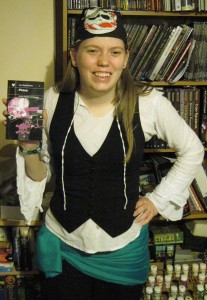 the rocking deck to join a team heaving on ropes. He no longer noticed the calluses that marred his pale skin. He ignored his rough, malodorous shipmates and lost himself in thought.

He yearned for the soft-swaying, green tranquillity that had once been so dull to him. The allure of the sea, with its exotic scents and dramatic blues and greys, had been killed by months of toil, mockery, grime and the salt-tinged stench of close-packed, unwashed bodies. The wood of the planks and mast was stiff and silent under his hands, like a carcass. Moiron had learned the bitter lesson, that daydreams are for enjoying, not living.

from ‘The Trouble with Daydreams’ by Catherine Hill