Joan was the first author to sign a novel with Fox Spirit. One of her novels with us also has the distinction of being our first crime release. Requiem in E Sharp. 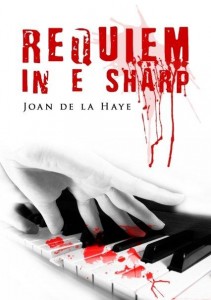 As The Bathroom Strangler’s frenzy escalates and the body count mounts, Nico van Staaden, the lead detective on the case, finds himself confronting his own demons as he struggles to solve the murders of the seemingly unconnected victims. The lack of evidence in the sequence of deaths and pressure from his superiors are challenges he must overcome.

The resolution is bloody, savage and merciless.’

You can find the book on Amazon here
‘Bravo. I picked this book up and couldn’t put it down. Dark and grisly at times, the character development pulls you into the lives of these hopelessly screwed up people and doesn’t let you go. I’d never dreamt of having a peek into the backstory of a serial killer as intimately as I got in this book. Equally disturbed and enthralled, I am wondering how I am already done reading and yet in want of more?!’ – Amazon reviewer

His hands shook. He wanted them to stop; he wanted everything to stop.

All he could hear was her banging on the piano. It reverberated along the passage,
through the tiled floor of his childhood bathroom and into his brain. The feel of the cold,
smooth surface of the bath beneath his small curled-up body was soothing and calmed him.
It was safe as long as she banged on the piano. The moment the music stopped the real
nightmare would begin. Urine ran down the insides of his legs causing his jeans to cling to
them. The music stopped. She would be coming soon.

He closed his eyes and tried to shut out the memory.

The car boot slammed shut and brought him back to the present. The street lights above
his head flashed on and illuminated the quiet street. A slight though cool breeze played with
crisp brown leaves on the ground around his feet; a dog barked down the street, disturbing
the quiet suburb. The owner of the dog yelled at it to shut up. Why did people keep dogs to
protect them, then stop them from doing their job? It was something he would never
understand.