We are delighted to announce that the next release from Fox Spirit will be Joyce Chng’s ‘Starfang : Rise of the Clan’.

We ran this as a serial a couple of years ago but it’s coming out soon as a complete novel. Werewolves in space!! 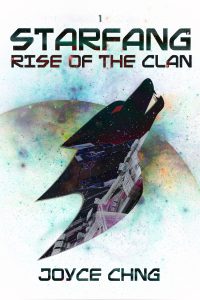 ‘Wolves should not be in space, but here we were, a clan of wolves and merchants. Instead of the preserved forests of New Earth and Noah’s Ark, we were in ships of steel and armour, reading data scans and commanding officers on the bridge. Wolves within the uniform of merchants and mercenaries, human seeming, claws and teeth sheathed.

Our genes kept us apart from the homo sapiens race. Some merchant clans tried to spread the rumour that we were the product of genetic engineering, a pact made between the secretive flesh engineers and our clan progenitors, in exchange for sacred information we didn’t know and care about. Some rumours were more far-fetched, bordering on the mythical and mystical and the alien, alleging raptor-like shishini or grey-tinged jukka involvement.’

Singaporean, but with a global outlook, Joyce Chng write science fiction and fantasy, YA and urban fantasy. Her fiction has appeared in theApex Book of World SF II, We See A Different Frontier, Visibility Fiction, Crossed Genres and Bards & Sages, to name a few. Her urban fantasy novels are written under her pseudonym, J. Damask (which she will tell you is a play on her Chinese name).

One Reply to “Starfang : Rise of the Clan”