“If You Can’t Take Me at My Jenny, You Don’t Deserve Me at My Bette”

I have to preface this with saying that I didn’t really watch The L Word MUCH, except 1 nightmarish weekend viewing when I was bedridden with the flu, and via YouTube clips for laughs in my down time. Be that as it gay, I would like to put forward that all lesbians have an innate knowledge of The L Word. Am I right? Everything that happened on that show was just telepathically communicated between all lesbians. Even if you never, ever watched it, YOU COULD GUESS. You know? You could. All lesbians could. I’m not even a fan, but, as a lesbian, I culturally cannot, and literally cannot, let it go. So many feelings. Feelings that might take years to work out.

Let’s be real, this show was not super good. It’s not that I hate The L Word. How can I hate my fellow lesbians, or rather, straight actors portraying fictional lesbian characters for gigantic paychecks, and also Leisha Haley? Among lesbians, I have no enemies. I want us all to succeed. At being gay. Now and forever. Or, I want us to succeed at being really committed to pretending to be gay on television. Playing gay on TV is, after all, just saying, the same exact thing as being actually gay, so we’re on the same side, here. Except that they win awards for pretending to be gay, and all I got was a stupid adolescence of struggling with my sexuality for actually being gay. Minus that one difference, it’s the same exact thing.

Here’s the thing, even with all it’s flaws, The L Word is still pretty much like 80% of the media we have to work with as queer women. If you’re gay, you know, there aren’t a lot of us on television. On The L Word, the characters are pretty much all lesbians, so, because that is true, it should obviously be praised just for existing. Seriously just for existing, at all. The L Word wins just for getting out of bed that morning and becoming a show on actual television. That’s real talk. The bar is seriously that low.

The thing I came here to talk about, though, is what I learned from this show, which is how to stop worrying and love Jenny Schecter. So, first, I’m going to need to tell you why Jenny Schecter is a firework. 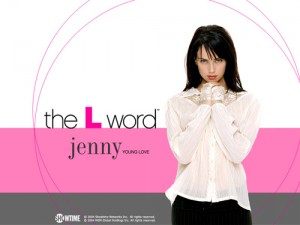 When I talk about this series, people that have already seen it often ask, “Why does Jenny Schecter exist? Her story about the manatees was just the worst.” Well, you just answered your own question, my friends; she exists because her story about the manatees was just the worst. Because somebody has to move the motherloving plot along. Don’t you know how TV shows WORK? I would also like to add that Jenny made a ton of money as a writer based off of that goddamned manatee story, so I don’t even know what the moral to that is. You can’t hate Jenny, because Jenny is the rainbow. If you’re a rainbow, then so is she.

Jenny Schecter is The L Word’s most hated character by a wide margin. A woman of any walk of life being hated on is usually the only thing that has to happen to win me over to her side. Shaming and punishing women for being imperfect is both the cause and effect of an unnameably large portion of society’s ills, and it has to end (if humanity is going to progress like in Star Trek). It’s my duty to have the backs of other women just on principle, because I said I was a feminist, and I meant it. I got you, girl. Jenny Schecter is a feminist, too, more so than any of the other characters, with the exception of Kit. While Kit surrounds herself with women, and provides a comforting friendship to all the women she meets, Jenny is pro-active in taking vengeance upon the men that have actively wronged her. Other than Bette, who invokes a strange yet passionate form of conservative liberalism, the other characters are apolitical, at best.

You should never ask why Jenny Schecter is a part of that show, because she is unquestionably the most important character, and if you hate her, you are only hating the most vulnerable parts of yourself. The cycle of anger must end with you. While she is prone to extreme dramatic over-reaction in all situations, that’s just because life is turned up to 11 at all times for Jenny. She’s a survivor of abuse, she’s a feminist, she’s a lesbian. She’s rough around the edges, but she deserves a home.

What you SHOULD be asking is why did Helena become a regular cast member? Wasn’t she just THE WORST? And why wasn’t Heather Matarazzo on the regular cast instead, and what can you do to go back in time and make that have happened? And wasn’t Dylan just THE SKETCHIEST? Oh my GOD! She just WAS. 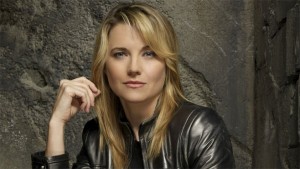 What you SHOULD be asking is why in the Hell wasn’t Lucy Lawless, who played the soft butch in the last 2 episodes, given her own spin-off series called, “The Flirty Detective?” And if Pam Grier was on this show the whole time, why wasn’t it BETTER?

All of those questions are more important than, “Why Jenny?” You KNOW why Jenny.