What I learned from cult TV – A Window on the Weird!

I grew up without TV. That is to say the years before I became aware of what effect I could have on the world around me and how I could manipulate it, were TV free. Then in 1977, the most amazing thing happened; the Queen celebrated her Silver Jubilee. Now I’m not especially a royalist it’s just that this meant my parents decided it was time we had a TV.

I was enthralled! All the pictures I had had only in my imagination until then became a monochrome reality; toys could talk and walk, miracles happened and aliens were common place! TV time was warped; unlike my toys, it didn’t wait for me while I went off to eat my tea.

As I cowered behind the sofa peering over my father’s shoulder as the Daleks advanced on Doctor Who, it occurred to me, that there was something bizarre either about me or human nature. My dread was what kept me glued to the screen (one eye at a time). This has to be the essence of speculative fiction: facing one’s fear of unknown possibilities regardless of the consequences!

Then later, as Joanna Lumley strutted her stuff in Sapphire and Steel I discovered that there was a tacit agenda between a man and a woman that was much more exciting than playing house. Zombie mutated form of chase became a favoured game tested on the unwitting boys in the fourth grade of primary school! 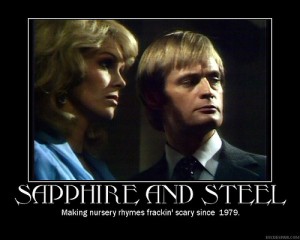 The Whiz Kids let me know that I needed to stick to my guns and not give up, no matter what sort of pickles I got into (and there were many), technology would always be there to back me up. The re-runs of Children of the Stones told me the weird could happen closer to home than I had hoped possible – I lived then not far from Avebury. Robin of Sherwood brought my all-time hero to life and intermingled the legend with the arcane. Blake’s 7 gave me the ever delicious concept of the reluctant hero. Then Sonny Crocket in Miami Vice confirmed my long-held belief that good and bad are not clear-cut issues, no hero is without flaws. It was also on this series that my first stories were loosely based.

So it is not one show but many moulded my impressionable imagination. Cult TV gave me a perspective far broader than my immediate world. The Hollywood camera angles and soundtracks of the American shows gave my visions new depth and scope. The weird creativity of the British ones freed me of my inhibitions and fear that the murky depths of my imagination were something to be ashamed of. All in all, cult TV series taught me that to view the world as the weird and gave me the confidence that the pictures in my head could become one form of reality or another. 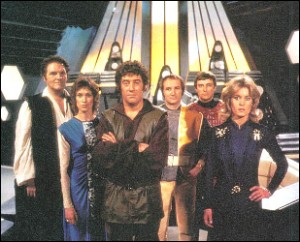 I’ll let Blake’s 7’s Dr Havant have the last word, “Reality is a dangerous concept. Each one of us interprets it in a slightly different way. Every sense impression is filtered by the brain and altered, sometimes just a little, sometimes completely, to fit our individual model of what the world is about. If that model should be challenged…”