Skip to content
Gender, intelligence, background, job description, humour level, sense of humanity, number of guns, allergy to sunlight, being the chosen one, sexuality, marital status – none of them form an impediment to being a badass.
That’s right, folks, it’s the old EJ hobby horse of equality.  That’s principally what I learned from Cult TV, and it’s all thanks to Joss Whedon.
It was the delightful exposure to the first season of Buffy the Vampire Slayer at the tender age of 22.  Through the delightful eyes of Whedon I was exposed to the world of a typical teenage American high school girl, albeit one that looked like Sarah Michelle Gellar, her British watcher – Giles; and her geeky, outcast friends.  As someone who perpetually failed to fit in, it was an interesting cast and an interesting story.  I slowly fell out of love withBuffy as it strayed from its beginnings, as the stories got more convoluted and the cast got bigger.  Yet is still remains a genre defining TV show. 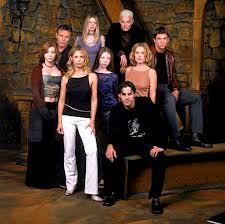 Angel, on the other hand, remains as a perpetual favourite.  Not least for the way that almost every character tickles the ribs of another.  It was through Angel, Wesley, Cordelia, Fred, Gunn, and Lorne that no matter who has the upper hand – strength or smarts-wise – each character is a badass in their own right.  Green, black, higher power, daemon hunter – rogue daemon hunter; genius abandoned in Pylea, vampire, reformed vampire, lawyer, female, male – it didn’t matter.  Though it never reached the popular heights of its sister show, it is still a firm favourite of mine. 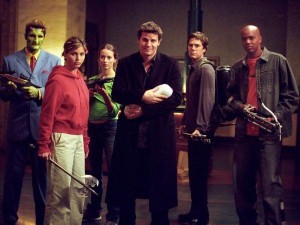 Firefly, watched six times over in 2013, exemplifies Whedon’s work; and it is my favourite of his shows.  Its cast, clearly enjoying their characters and scripts, hit the ground running from episode one; and bring us such wonderful and enticing people to spend time with.  Each and every one of them strong, flawed, funny, interesting, complex, motivated, and individual.  The reasons I love this show are many and varied, but at Mal’s table every crew member has a voice and a job; even if the final say is his. 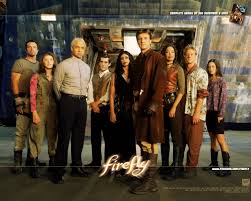 Dollhouse too feature ensemble casts of diverse characters, each a badass in their own right, and each contributing to a collective, making the whole greater than the sum of its parts.
Whedon’s shows, sadly, are not typical.  His work challenges the preconceptions of the TV establishment – those that listen to focus groups, that talk in terms of racial diversity – meaning they need to get a black person, a gay person, a woman who isn’t the romantic lead, and an Asian person on the show full of white men.  There are too many TV shows these days that focus on diversity – or completely ignoring it – whilst forgetting about equality, and in doing so they lose what is magical to viewers like me.  I could care less what colour, gender, or sexual orientation my lead character is, or the group of people they surround themselves with.  What I want is something interesting to watch with a character that makes me laugh, and makes me think
Then I found this video:
http://www.youtube.com/watch?v=cYaczoJMRhs
Joss Whedon has been a pioneer in this field, crafting shows that appeal to the outsider, the forgotten, the smaller demographic.  He gives us an ensemble of characters so that we can choose who we identify with, without having to be told.  He gives us characters that understand that being together, and working together makes things all the sweeter in their victory, and failures are softened.
Yet, through everything, the one abiding message I have from all of the Whedon shows is this:
Heroes can come from anywhere.  They can be anyone.  They can do anything.
You don’t have the buy or be sold that the hero is black/gay/female/fat/short/an alien/not super smart – if the character does the heroic deeds with humility and is as flawed the next person, then you have a well written character regardless of who they are.
Equality means anyone can be a hero, and it’s Whedon’s world in which I choose to live.