The Weird in the Normal.

I’ve never really had a fear of anything. No real phobias. I grew up clambering around rocks and hanging out with six foot tall lads, so by that point nothing really scares you because you can’t fear anything if you want to join in the fun. I was pretty desensitised by horror from a fairly young age. I blame Monty Pythons Killer Rabbit of Caerbannog, who forever made viseral blood and guts scenes seem obscenely funny to me. But I LOVE things that weird me out. Things that stay in my head, nudging me and prodding me to savour them even though they’re strange or grotesque. 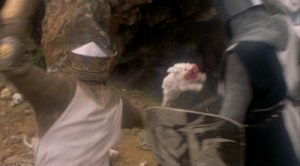 I don’t get scared by horror stories or films – they don’t make me want to keep the light on at night. But sometimes things freak me out because I keep thinking about them and that’s when I know I can use it in a story. My favourite female horror writer is Poppy Z Brite. I loved the wistful dreaminess of Lost Souls but it was Exquisite Corpse that captured me. Somehow Brite had managed to make the grotesque into something beautiful. The detail in the level of description drew me in and I found I couldn’t look away – I was swept along into the horror of it as much as her characters. She takes the normal bright lights of New Orleans and turns them into something dark – hot, slick nights that mask the stink of blood and rot beneath crowded streets and forbidden debauchery. By reading Brite, I learned that when writing horror; the devil is in the detail. The texture, the smell, the colour, the sound. The way a moment plays with your senses is what allows it to hang in your memory.

When I started writing horror, I found that I didn’t write messy bloody horror. I wrote weird, creepy horror. I wrote horror that savoured the strange. I like writing about normal people doing normal things when something odd happens. And then escalates. The squirming of a creature out of the corner of your eye. The unusual habits of the stranger sitting opposite you. All these ideas touch on that fear of the unknown. That ‘WTF’ sensation of not knowing what’s going on, but knowing that it’s not normal and being desperate to know more regardless of where the path takes you. I think that even if you don’t think you’re scared of anything, good horror will mirror a deep unknown fear. When you read it, you’ll blink and take a breath. Suddenly you’ll realise that your still mulling over that weird creepy moment a few days later. It twists and circles in your subconscious whilst you’re daydreaming on your lunch break or about to drop off to sleep. Good horror will crawl beneath your skin and settle there just long enough to remind you what fear is.

One Reply to “Women in Horror : The Weird in the Normal”