As they are the editors of the Fox Spirit book of African Monsters, we thought it could be a good idea to let Margrét Helgadóttir (MH) and Jo Thomas (JT) start the little blog tour we are having here at the Fox Spirit Books since the book is now published. In the coming weeks we are going to let the contributors tell about their monsters or other things on their minds. Let’s start with Jo, who has something she wants to say first:

JT: ‘Last year, we did a question and answer session between the two of us explaining where the Monster anthology idea came from. This year… Well, this year, you have a blog post. A slightly hi-jacked blogpost as I (Jo) got to write the first draft and have a few things to say personally. So, this year, I’d like to heap some praise on my co-editor, Margrét, and my publisher, Adele at Fox Spirit Books, for working like Trojans the last few of months in order to get everything in place. Anyone who knows me knows I’ve been moving and starting a new job, so I haven’t had much time for putting African Monsters together. So, three cheers for the hard-working team that did! And now on to the main event.’

The original intention a few years ago, the idea that formed with a Twitter conversation, was a “look at the whole world of monsters.” This eventually narrowed down to look at the monsters in our own pond, the European monsters. We were fairly eager to extend in to further volumes for other continents quite soon after imposing the restriction for European Monsters and happily Adele agreed this was a good idea.

Africa became the next place to visit on the world tour. It is, of course, a continent we’re both happy admit to the existence of and we had the benefit of Margrét having spent some of her formative years there so that she had a familiarity with a number of regions and folklores. As with European Monsters, the anthology was invitation only and so we used and abused Margrét’s contacts while also researching new ones. It was important to us to make use of authors and artists who lived or had connections with the areas they were working on. Although we had hoped to have been able to have solely African authors in the book, we have not been able to secure a hundred percent African talent for the resulting anthology, mostly due to time constraints and communication problems. Also, since we mostly have authors who write English in this book, the geographical representation, is sadly not a full reflection on the world’s second largest and second most populous continent. 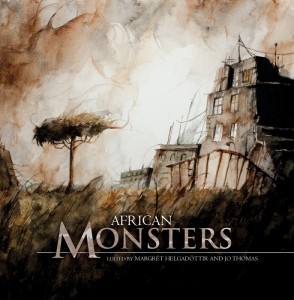 MH: ‘I feel we have learned much from editing these books when it comes to getting a good representation in the books. In following books we will try to have at least one translated story from a non-English speaking author. The key is to have the right amount of time, some luck and a good network.’

There is a wealth of skilled artists and published writers to look into and we consider our own anthology a jumping off point into the world of African fiction. But nevertheless, we have covered a small part of a large continent that we hope you enjoy. This is not the colonial “Dark Continent”—or, perhaps, not just the colonial, as that era is part of the history that formed the present day—but the stories we have gathered give grim glimpses of a darkness where the scariest thing is sometimes the bright light of day.

One Reply to “African Monsters : The Editors”