Getting an invite to write a story for an anthology is probably one of the best feelings in the world for a writer. There’s a kind of acceptance that comes with that invitation, a sense of ‘Yes, we believe you are capable and good enough’, and since writers are always fighting themselves and the multitude of blank pages which need filling, this kind of thing happening is not only a boost for the writer but also for the writer’s other projects. I certainly crowed with excitement when I read the email from Margret Helgadottir – not only because of the invite, but because of the publisher behind the anthology, Margret’s fellow editor Jo Thomas, and the idea behind the anthology. Accepting the invitation was a decision I didn’t have to think about – needless to say, I had no idea what I was getting myself into.

My first instinct was to choose the Tikolosh or Tokolosh – I had done some research regarding this strange, mischievous and dangerous creature for an article I had written some months before, so I had a good place from which to start. The Tokolosh, however, had already been nabbed by one of my fellow storytellers, and so I had to find a new creature to build a tale around. I began thinking that I needed to choose a creature which hadn’t received a lot of (or any) press, something that the folks reading these tales would be intrigued and creeped out by. And when I came across stories and reports of the Popo Bawa, I knew I had my creature.

The first roadblock, of course, presented itself then and there – most of the stories I had read about the Popo Bawa came from Zanzibar… The only other country I’ve been to either than my home (South Africa) is Australia, so how was I going to convincingly write about a creature I’d just read about and a country I had never been to?

Obviously the first thing I did was panic.

Googling Zanzibar presented me with countless links and hundreds of articles – searching on Facebook brought me to tourist companies, and although their beautiful photos helped me to begin envisioning Zanzibar’s beautiful coast lines, that was about as helpful as those photos proved to be. Until I came across Stone Town. That was when it all began to click into place. 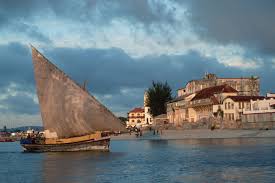 Stone Town is ancient and iconic – it has a long, varied and multi-cultural history, has been home to countless peoples, religions and beliefs, and was a trading hub between the Persians and Africa. *click* The link to my Tokolosh article bloomed in my mind, and then the rest of the tale began to fall into place.

I still needed a character to tell the tale through, however – someone who I could relate to (as the writer, having to ‘live’ inside his mind for a bit) and someone who knew just enough about the situation in the tale that I could comfortably explore Stone Town without coming across as a tour guide after a good tip.

I was still panicking – I hadn’t written a thing yet, and the deadline for submissions was fast approaching. So I began watching videos about Zanzibar on YouTube, and I began listening to Taraab on Soundcloud. Listening to that wonderful, energetic and rhythmic music someone helped to pinpoint the character I was going to use – a hard-bitten, cynical South African who was paid to investigate certain strange occurrences and deal with the creatures behind those occurrences.

So, I had my creature or monster, my setting, my character, and the details of a plot. I knew, however, that I would probably surprise myself with something in the plot – it usually happens, me getting this spark of inspiration which usually sends the plot off in a surprising direction while still leaving me the chance to connect it to the main plot.

And so ‘Taraab and Terror in Zanzibar’ took full shape; a tale about Terence and his trip to Zanzibar to investigate reports of resurgent and dangerous Popo Bawa. Except things are definitely not as they seem, and even Terence –with all his experience and street-smarts- is surprised when the full extent of the threat is revealed.

Be warned, though – I’ve taken some liberties (you’ll know them when you read them) in service of the tale.

I hope you enjoy it!