Another year has passed, and I am so happy to say that another monster book is born. In American Monsters Part Two we present you tales of beasties and monstrous terror from the North American countries of Canada, United States, Mexico, and a few of the Caribbean Islands, told by seventeen authors who are either from, have lived in, or have another strong connection to this region.

This is the sixth volume of the annually published Fox Spirit Books of Monsters. The book series is like a grand world tour exploring old myths, folklore and monster tales continent by continent. The journey started in Europe in 2014 before it continued to Africa, Asia, the Pacific region, and last year Central- and South America. I am currently working on the seventh and last volume in the series, Eurasian Monsters.

Six years ago, we demanded that something had to be done. We strongly felt that the monsters of this world are watered down and overused in the popular media and that only a few of them dominate the scene—vampires, werewolves, ghouls, demons, zombies—all from Western popular culture. We wanted to give the monsters a renaissance as real and scary monsters, a comeback so to speak, and we wanted to bring all the world’s glorious and terrifying creatures out in the open.

I feel very honoured – I have edited monster tales for several years now. It’s been an adventure. Not only have I had the opportunity to become acquainted with monsters and dark culture from all around the world, but I have met so many lovely people! It is a true blessing to be able to work with authors, artists, and translators from all kinds of cultures and backgrounds. I feel I have learned so enormously much when working on these books. Thanks so much to all for being part of this crazy but fun project. And thanks so much to Adele Wearing at Fox Spirit Books and her crew, for believing in this project and doing the magical work so the books look like the wonderful coffee table books they are to be.

You would think it should be easy to cover the North American part of the world and its culture—after all it consists only of a few countries. You’re wrong. I will mention three things that’s made this book a challenging editor task:

First, this region is not rich with cultures, it’s a cultural multimillionaire. Here you’ll find First Nation heritages stretching far back. There are the vast multitude of beliefs and ways of living brought from the other side of the Atlantic Ocean over several centuries by settlers seeking a new life in the New World, or refugees from wars or injustice, not to mention the languages and cuisine from immigrants from Central and South America, or the great history the slaves from Africa brought with them.

Secondly, what makes it even more complex, is not this enormous multitude of cultures but the way most of them have mixed and blended with each other throughout generations, creating new hybrids of cultures. There is also a huge span between the everyday life experienced in the far north near the Arctic, in Alaska or northern Canada, and the way of life south in Florida, California or Mexico, not to mention if you cross the sea to the Caribbean Islands.

One could of course argument that this is the case with many parts of the world, but I felt it was particularly challenging when putting together this book—there was no way I could include it all. Hopefully you’ll still find that the voices and stories I have selected, gives a cultural insight of this part of the world. You’ll see that several of the stories in this book portrait not only one monster but several, something I interpret as a result of the overwhelmingly cultural mix and diversity.

Thirdly, I am very proud to have so many different author voices in the monster books. Not only do I wish to scare people with monsters they probably have never heard about. I also want the books to give the readers a realistic insight into the continents and cultures we cover—it is a journey after all. I support strongly “own voices” in this kind of projects. So, one of the things I do, as anthology editor, is to actively seek out authors with an indigenous and First Nations background to contribute to the books. I think it’s important because I feel their folklore and history is a major part of a continent’s cultural history, but their voices are often neglected. 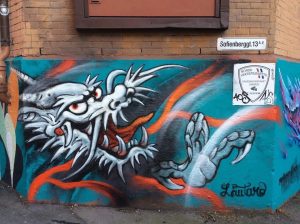 When I started working with American Monsters Part Two, it was obvious that I should spend time seeking out authors with such background. But several I contacted were sceptical. I could be wrong of course but I think that some felt that their culture has been misused, stolen and wrongly presented too much in popular culture, and that they perhaps felt that this was another attempt of this. I also think that the concept “monster” did not resonate with all. I have pondered much about this while editing this book and I am wondering if there are things I could have done differently. Hopefully I will figure it out for future projects. I did manage to include stories by authors with indigenous background, something I am very grateful for and something I think enriches this book.

Even though it feels like I have barely scratched the surface, I’m increasingly struck by how important monsters are. Humans of all times, regardless of geography, culture or demography, have created stories and myths about beasts, dark creatures, and monsters. The tales serve not only as entertainment, but often teach a lesson as well. Some monsters are universal. You will always find the shapeshifters, the flesh-eating walking dead and the great monsters of the lakes and sea. But what is important to one culture might not be so vital to another.

This is often something I don’t see until I have finished a book. I am not going to explain why, just observe that in American Monsters Part Two we have several vampiric creatures. There are many beasts and some spirits too. What is special in this book, however, is the amount of humanmade monsters, some hoaxes and cryptids, several with human-like attributes. As one of the authors says: “monsters can look like any man.”

Many of the stories question who really is the monster. In this volume you’ll find tales about loneliness, everyday struggle, and living in a harsh climate. You’ll find morality tales and/or stories with underlying critic of aspects of society, be it colonization and stolen cultures, gender roles, illicit activity, border conflict, indigenous issues, or the relationship between humans and the wilderness. All in all, I hope these tales will give you some new thoughts and insights about life in Northern America.

I hope you will like this volume as much as I have while working on it. Enjoy!