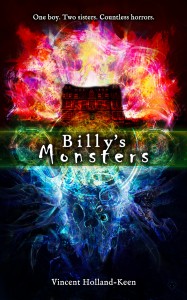 Billy has a minor role in the adult novel The Office of Lost and Found. What about him made you want to follow up on his story after the events of that?

Well, it wasn’t my idea; you (Aunty Fox) suggested it 😛 But despite that, I did think it a good idea. It had been a while since I’d finished a novel, the proper sequel to The Office of Lost and Found had stalled, and tackling YA just felt right. As a kid, I loved ‘The Lion, the Witch and the Wardrobe’, ‘The Weirdstone of Brisingamen’ and ‘The Dark is Rising’. As an adult, I’ve been just as enraptured by Harry Potter, the demon Bartimaeus and pretty much anything Diana Wynne Jones has written. A child or teenager going on an adventure seems inherently more dangerous because they have relatively little power in our world. Grown-ups are primed not to believe them. They can’t solve a problem with a credit card. If they want to chase down a villain, they have to get on their bike or catch a bus. And because they haven’t experienced as much of the mundaneness of life, they can see magic where an adult might not. Personally, I can’t understand why a writer would want to write a novel about a navel-gazing university professor for a coterie of literary critics when they could be writing about explosions and monsters for the kid they were when they discovered their love of stories. Billy was my excuse to do just that.

Were there any difficulties in adapting the Lost and Found world to a YA suitable novel?

No. Do you need a longer answer? Oh, okay then. The Office of Lost and Found is deliberately weird. It’s set in our world, but with a grim strangeness bleeding into it. One of the lead characters repeatedly tells the other that there’s no point trying to make sense of what’s going on, because the answers don’t make any sense. Most of the strangeness is pushed to the background for this follow-up in order to focus on just one of Lost and Found’s threads: monsters that lurk under the bed. Of course, that on its own is fairly conventional in fiction terms, so the fun comes in exploring the repercussions of that reality and throwing in twists on the concept you might not expect. In fact, the most difficult part was figuring out how to handle swearing. There are a least a few occasions where the right word to use was absolutely the f-word, but I fudged in something else instead. That’s not to say the prudish won’t find some abhorrent language in there, but in relative terms I tried to keep it quite prim and proper.

Most of us don’t embrace the monsters under our bed. What makes Billy so different?

But you do, right? I can just imagine you giving the monster a big hug before bedtime and the monster sighing and patting you on the back and going ‘yes, yes, that’s quite enough of that’. I don’t think Billy would quite go that far and to begin with he was certainly as scared as a typical child would be. He feared those misshapen shadows glimpsed out the corner of an eye until he was shown how to view such things in a new light; one where a gruesome hybrid spider-rhinoceros creature could instead be a mate you played tag with (with emphasis on the ‘could’; just like humans, some gruesome hybrid spider-rhinoceroses are assholes you wouldn’t want to play tag with). So I don’t think Billy is really that different from anyone else, he was just given an opportunity denied to most of us. 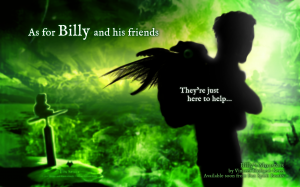 How would you describe Scarlett and Billy’s unusual brand of heroics?

Billy watches too many movies, so likes to think he’s an action hero – Indiana Jones, John McClane, that sort of thing. But there’s a difference between racing into a burning building to save a puppy because you want to be the hero, and racing into that burning building because you want to save that puppy. In contrast, Scarlett absolutely doesn’t think she’s a hero and only does what she feels she has to. Consequently, she’d probably be annoyed if you did call her hero.

There is obviously a lot more to explore in the world of the Nightmare Factory. What are the chances of a follow up having more action take place in that world?

None. Well, maybe a small chance. The worlds conceived in The Office of Lost and Found stretch far beyond the realm of monsters, so I’m interested in seeing what else is out there. And then it would be interesting to see how that something else impacts on our world and maybe the world of the Nightmare Factory. As a general rule, I’m all for smushing lots of things together to find out if the resulting reaction is pleasingly combustible. But for the time being all I can say is that the follow-up to Billy’s Monsters is going to be concerned to a greater or lesser extent with clouds of the white and fluffy variety.