The cold never bothered me anyway

One Wednesday afternoon in the very early 1990s BBC2 aired the TNG episode The Best of Both Worlds Part 1, the game changing season three cliffhanger which pretty much informed on every Star Trek incarnation from then on. As a scifi/fantasy/cult TV nerd of longstanding I was suitably agog when old Locutus of Borg filled the viewscreen and then beardy shoot-first-and-ask-questions-later Will Riker gave the order to fire. Like Isaac Asimov shouting out for them to ‘start part three’ as the credits rolled at a screening of The Empire Strikes Back, I was quaking to see the conclusion. Okay, I thought, it’s a season finale, I’ll have to wait like everyone else… How naïve I was.

The BBC lost the first run rights (didn’t fight for the rights?) to screen TNG after that. I didn’t have access to Sky One, and lived in a small village in the north of England with little or no access to video rental beyond a few copies of Death Wish 4 and Ladyhawke on a revolving carousel in the off licence. No internet back then, no VOD, DVD. Pretty tough to find any spoilers in the years before the global village.

I waited almost two years to find out what the hell happened. Although it did not produce a sudden epiphany, those two years in the phantom zone taught me a lesson, perhaps the most important lesson I have learned about being a cult TV fan: sometimes you have to just let it go.

Living in this time of tenuous television I witnessed horrors and disappointments. I lived through the annual decimation of the cult TV landscape. 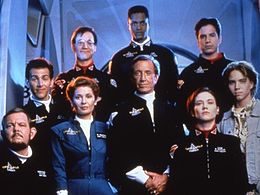 This is by no means a complete list, and I’m not saying they were all worth saving (it is a sad indictment of British cult TV at the time that without remembering a single sharp detail of the lacklustre Crime Traveller I think of it fondly and the DVD is in my Amazon basket as I write this). There wasn’t a Buffy or a Battlestar Galactica among them, but I remember them all like Mr Chips remembers his pupils. They were offered to us as an investment: invest your time, invest your emotion, invest your money even. And then they were gone.

I know that for every half a dozen of these there might have been an X-Files or a DS9 or an SG1 but there were times I didn’t want to play that game. I didn’t want to set myself up for the fall. Those short and intense relationships can take their toll. I know it’s not me, it’s you; and I know it’s not personal, it’s business and viewer demographics and advertising and blah blah blah but goldarn it you ask us to care!

So in these thoughts, myself almost despising, haply I thought on TNG.

I thought on that long and frustrating wait between S03E26 and S04E01 and how I’d played all scenarios in my mind. I remembered how I took solace in remembering and re-watching. I recalled how the hole in my fanboy life had been filled by self-reliance, novels and a dozen unproduced screenplays of my own. I remembered that I’d never picked up a novel in my life which was cancelled before the end or frustrated me with two year cliffhangers (A Song of Ice and Fire notwithstanding).

So these days, when Revolution goes, or we lose Almost Human, or Believe, I can sit back and smile at the memory of those brief yet intimate moments we shared, and I can deal with them not lasting forever. And I also know none of them have truly gone. Because boxsets! 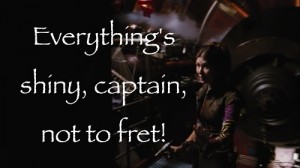 From watching – and being prevented from watching – cult TV I have learned patience, forgiveness and to take what I can get. If you ask me if I’d rather have a cancelled-after-one-season Firefly or no Firefly at all, I’ll take the short and shiny thank you very much.