“Naming the Bones” – By Laura Mauro

Laura Mauro is an award winning author and is best known for her horror and sci-fi short fiction. She was born and raised in London, where her BFS nominated novella “Naming the Bones” is set.

“Naming the Bones” is a wonderfully creepy novella published by Dark Minds Press, and is a thing of beauty, with its instantly recognisable cover art by Peter Frain the book grabs your attention, drawing you in, before you even start to read Laura’s mesmerising story. 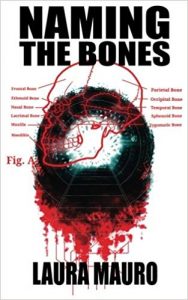 The title of the novel “Naming the Bones” comes from the coping strategy of the protagonist Alessa Spiteri, who following a bombing incident on the London underground struggles to cope with returning to her day to day life, and uses the simple trick of reciting the bones in the human body as a distraction to her growing fears and anxiety. However it isn’t just the trauma of the bombing that bothers Alessa, but also the disappearance of a fellow commuter who wandered off down the underground tunnel towards a light and what he thought was help; but instead was just a darkness that seemed to swallow him whole. Now that darkness seems to be everywhere for Alessa, and as it encroaches on her life more and more, she realises that the monsters in the dark are more than just figments of her traumatised imagination.