Kindred is a dark and deeply disturbing novel that predominantly explores the lives of slaves in the antebellum South through the eyes of a time-travelling protagonist. The fact that this protagonist, Dana, is a woman of colour from the 1970s allows Butler to show a strong juxtaposition between the world that Dana knows and the world she finds herself unwittingly thrust into. 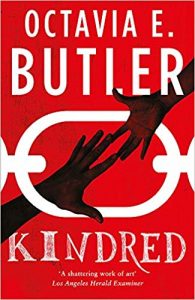 The story itself is told entirely from Dana’s perspective, and follows her as she is bounced back and forth in time. Her home is in 1970s California, where she is settling into a new property with her (white) husband, Kevin, while her trips to the past take her to the pre-Civil War Maryland plantation of Rufus, the son of a wealthy white landowner. Between trips, she piece together evidence to suggest that Rufus could be one of her ancestors, and that the daughter of one of the local freed slaves may be as well. In one trip, she also inadvertently brings Kevin along with her, resulting in him being left behind when she is bounced back to the present. They reunite on Dana’s next trip, though five years have passed for Kevin, leaving him bitter and cold at the atrocities he witnessed while he was in the past. The novel ends with Dana killing Rufus and returning to the present for the last time, losing an arm in the process.

This is not an easy story to read as it highlights some of the worst elements of racism and discrimination inherent in American society during the first half of the nineteenth century, and the almost casual way in which people of colour were dehumanised by their owners at the time. In portraying the slave/master dynamic, Butler rarely pulls her punches. The slave owners are shown to be cruel almost to the point of sadism, though in most cases this appears to be simply a side-effect of the near-institutional belief that the slaves are nothing more than property, objects to be bought and sold, and used for the betterment of the whites. It’s obvious that Butler wants to shock the reader into thinking about the subject matter, that she wants the reader to explore the historical and social notions of slavery that she presents within the narrative, and she does this with skill.

Having read a large chunk of Octavia E. Butler’s work over the last few months, I really wanted to love this book. However, while I found it to be an engrossing and thought provoking read, I don’t think it’s quite worthy of a full five stars.