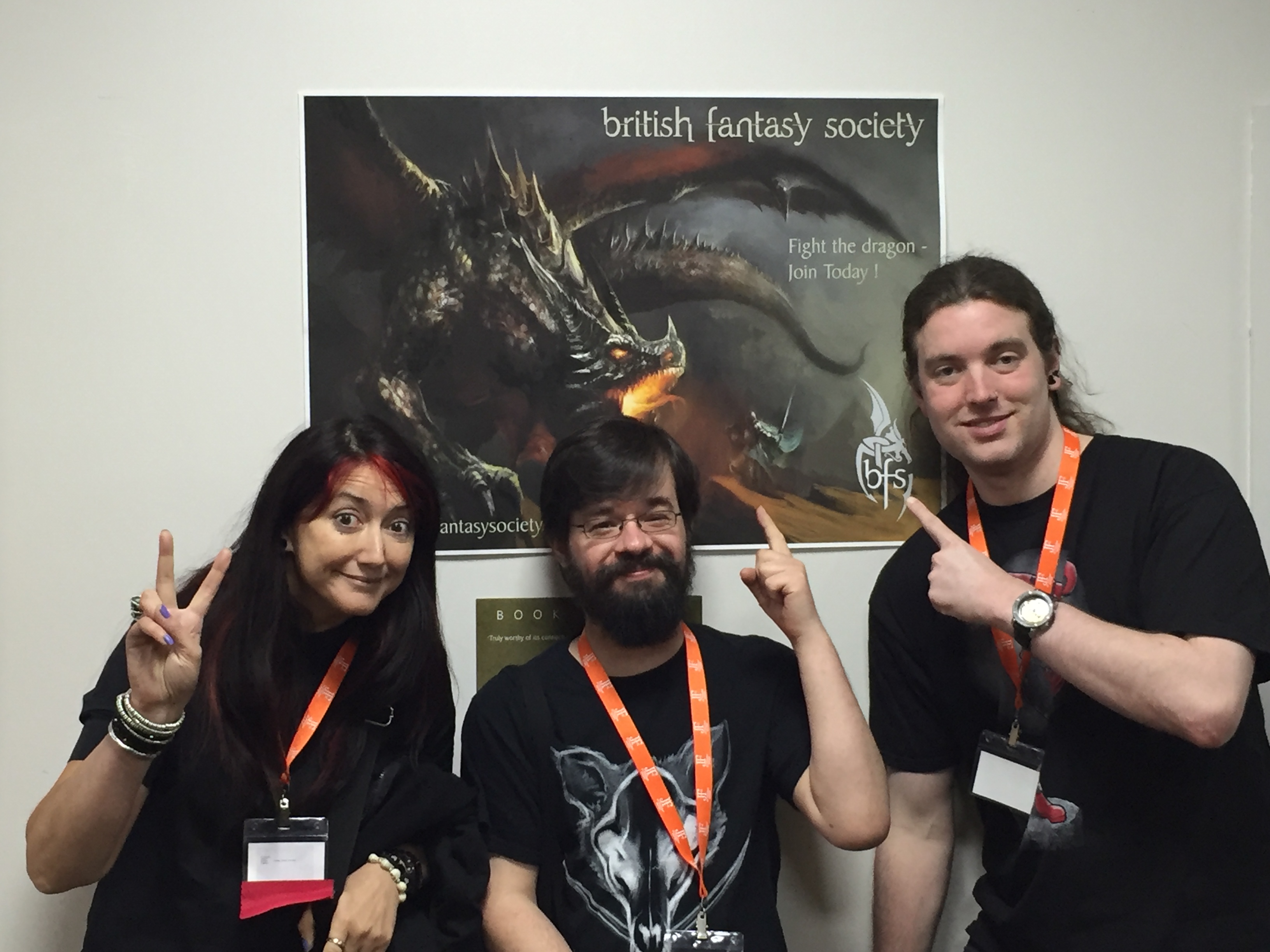 Books and Fox Field Bag packed we headed off to Nottingham and the East Midlands Conference Centre for another FantasyCon.

I arrived on the Saturday morning just as the Friday nighters were emerging for breakfast and in good time to drop some books off with Pendragon Press who I owe a huge thanks to for hosting homeless books, along with Alchemy for taking some copies of Wicked Women, which two of their editors had done under FS. I then headed to my first panel Monster Mash Up with Carrie Buchanan, Cassandra Khaw, Tim Lebbon, Will Macmillan Jones and Moderated by Jon Oliver who had karaoke throat. There was an examination of popular monsters, consideration as to whether there is anything new or we are just looking now to the very old, whether the real monsters are modern politicians, serial killers or every day scumbags and some thoughtful comments on the need for sensitivity when delving into other cultures for exciting new monsters. 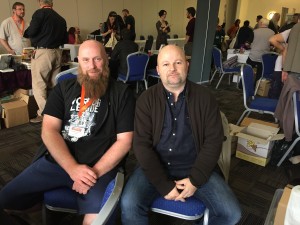 In the afternoon I moderated a panel on Marketing ‘Turn up the volume’ with Sophie Calder, Jo Fletcher, Matt Shaw, Graeme Reynolds and Danie Ware, which started with a fire alarm. Sadly we lost 15 minutes of what was a really interesting panel which meant I only asked about half my questions and the audience were cut a little short to. There were some excellent insights about how publishing has changed in terms of online presence and also in store behaviour, the need for authors to be willing to do a lot themselves and what publishers can offer in terms of guidance and support. In the audience questions we touched on where writers can go for support and advice, some of the well established writing groups that can offer advice, regional writing communities or organisations that offer courses and advice. Many courses run by Creative Leicestershire are completely free.

I thoroughly enjoyed participating in both and I hope everyone else enjoyed them too. A warning to future panel planners, if you put Carrie and I together again and please do, we may continue to riff on the most tasteless news items we can find. 😉

After that I was free to attend some panels which I did and I have to say the standard this year was excellent. Well done to Richard Webb for a huge amount of work and thought!

The Non Humans panels was entertaining and interested and I particularly enjoyed Ren going super dark about AI and people and love and Adrian and Ren discussing ethics and science. Some interesting thoughts generally on what makes something human and writing the alien from all the panel members which included Janet Edwards and Deborah Install and some very nice one liners from Gareth Powell. 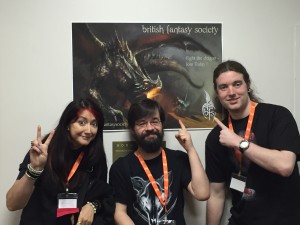 The screenwriting panel proved fascinating even as a non screen writer Stephen Volk, Jason Arnopp, Ellen Gallagher, Stephen Gallagher and Gavin Williams were lead through a fascinating discussion by Catherine Hill. Ellen’s passion and knowledge were a stand out for me in that panel.

On Sunday I attended the Audio panel lead by the incomparable Alasdair Stuart and featuring Chris Barnes, James Goss and Emma Newman who covered getting into it in the first place (various kinds of accident seem to feature heavily), what it involves, why they love it and numerous other things including a number of wonderful resources that had us all scribbling or typing away. A very funny, insightful and smart panel and perfect for the more general audience. 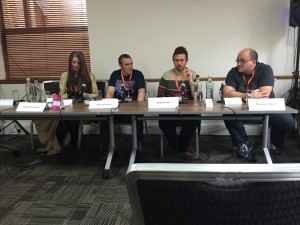 It sounds as though readings, launches and other things all went well, several of our writers were involved over the weekend and I was glad to hear Jo Thomas had a good and well attended panel, Ruth Booth’s readings, including her Winter Tales poem were well recieved, Chloe rocked the Poetry Slam, Steve Poore had a good launch with his title for Kristell Ink and I hope everything went well for the everyone else. While we were there we got some stock signed and even sold a few books.

Of course one of the great joys of any convention is seeing old friends, making new ones, finally meeting people you’ve known online for ages, talking to people who actually understand what you are saying and get the references and are all excited about the same things! Learning new things, having better brains than yours to pick for advice and being around so many incredible inspiring people. The collective levels of creativity at FantasyCon are mind blowing.

The whole event was well organised, ran smoothly and the teams behind it and running it all on the ground did an amazing job. The panelists were wonderful and I heard good things from everyone who attended panels. A huge thanks to the FantasyCon team and good luck to the 2016 FCon the T’sea team! 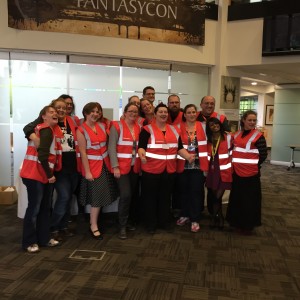 We were on three shortlists Best Short Story for Gaie Sebold’s story in Wicked Women, Best Fantasy Novel with Breed by K.T. Davies and Best Indie Press for the second year running. I thought in spite of very stiff competition Breed was in with a chance so was pretty nervous.

Juliet McKenna did a sterling job, noting the loss of Graham Joyce which got a strong and emotional response from the community and neatly rounding up the sad puppies saga and moving on from it very nicely indeed. There was a standing ovation when Juliet was very deservingly awarded the Karl Edward Wagner Award.

It seemed to be a night for people being caught off guard and speechless. Literally, most of the winners had prepared nothing! Those that had sometimes did so on the back of a menu as a just in case. I think it was all the lovelier for it. I thoroughly enjoyed the delighted and flabberghasted responses of people unused to accepting awards, of which somehow I found myself one!

Breed lost to the marvellous Frances Harding who is a worthy winner so huge congratulations to Francis. Best Short went to Emma Newman which again is a great winner and I am delighted! But Fox Spirit Books did get Best Indie Press and I was shaking so much with shock of it I had to hold the podium with both hands while I stumbled out something about the skulk being an amazing group to wok with and a wonderful community and a shout out to Alasdair Stuart for being integral in conning me into it in the first place. Also thanks to the judges for ploughing through a stack of material on usb sticks (we published 18 titles in 2014, I don’t know how).

If you will all indulge me I will now go on to repeat my sentiments a little more coherently:

Fox Spirit is barely over three years old, we have over 30 titles out and have worked with a huge number of incredible writers and artists in that time. I am deeply proud of everything we have done both in terms of books and the community the Skulk have built for themselves through shared TOC’s and events like Fcon. It is an honour to help these stories get out there and to watch you all support and encourage each other. 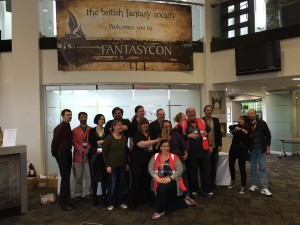 I want to say as well that behind the scenes Daz (our copy editor), Gav (our formatter) and Vince who picks up a lot of layouts and things last minute, do a tremendous amount to help make FS work. I would be lost, utterly without their hard work and support. There are many others who help at various times in various ways and I am utterly grateful to them too.

Alasdair Stuart, Kate Laity and Steven Savile were all instrumental in the great small press con job, for which I love them all the more.

In the last year my business partner and also Mr Fox have provided a huge amount of support in a variety of ways to help keep FS going strong.

Our readers, reviewers, retweeters, likers, sharers etc are amazing and we value you all and everyone in the BFS who nominated, voted, judged on any award (I’ve done it, it’s hard!) you are all hugely important to us and thank you.

So 2016 is another busy year and this one isn’t over, so I better get back to work but this lovely wooden thing is truly a credit to the whole skulk! 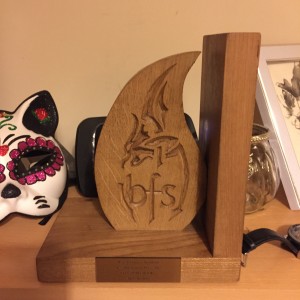 A full list of the Winners for this year can be found here. A wonderful crowd I am honoured to have been part of!