Occasionally here at FS we invite guests to come and hang out because you know, we like that thing they do. In the case of the Cultural Gutter, one of our own skulk members is heavily involved in an awesome project, so obviously we wanted to help! Please do pop over, check out the Gutter, help if you can and just eenjoy it if you can’t. – Aunty Fox 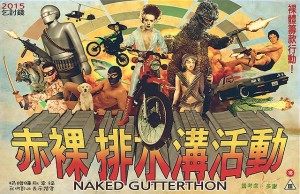 Hi, I’m Carol and I’m the Comics Editor and Evil Overlord of The Cultural Gutter. Back in the misty shadowlands of 2003, The Cultural Gutter was founded to offer clear-eyed and thoughtful writing about disreputable art: comics, video games, science fiction and trash cinema. Since then we’ve expanded our mandate a bit adding editors who have written about television and romance. Most of these art forms are more respectable than they were back in the Aughts, or at least particular parts of them are, but we feel like we’re still offering something special with our essays. We’re not great at telling you whether you should go out and spend your money and sometimes we talk about art from sixty or even two hundred years ago, but we always try to have an interesting angle and some things to think about—or at least some good jokes. Right now we have a piece up about “Time Loops and the Failures of Memory” in films ranging from Groundhog Day to Momento. Auntie Fox has written about just how long she’ll give a show before she gives up with, “The Core Dynamic; Or, Why I Won’t Give A Show A Half A Series To Figure It Out.”  And I’ve written a few things I’m pretty pleased with—a piece about Planet of the Apes and “relatability,” another about strong female characters and one about Punisher: War Zone and what we mean when we talk about “bad.”

I’ve only been the Gutter’s publisher and Evil Overlord since 2006, but I am proud of our site and our writing. In all the time that we’ve been online, we’ve paid our writers—both ongoing Editors and Guest Stars—for their pieces. Originally, we were supported by an operations grant from The Canada Council for the Arts. Unfortunately, times being what they are, we lost our grant. And that’s where Gutterthon comes in. We’re trying to raise money to stay online and keep our commitment to paying writers. With our goal, it doesn’t come out to much, about $20 per article, but these days, with so many creators being asked to create for exposure, we think it’s important to pay our writers for their work. Exposure only really means something if it leads to something better.

But before I get all hot-headed about the newfangled system of platforms, content creators and exposure, I’ll just thank Fox Spirit for the books they’ve donated to our cause. If you contribute to Gutterthon 2015, you have the chance to pick up digital copies of Drag Noir (2014) and The Girl At the End Of The World, Vol. 1 (2014), which include stories by me: “The Itch of Iron, The Pull of the Moon” and “Sophie and the Gate to Hell.” (I hope you like them).  And we also have medieval charms (your choice of healing or agricultural) made by the Skulk’s K. A. Laity. And I’m making some homunculi, star stones (to keep the Great Old One’s terrifying dreams away), and some handprinted Cthulhu Moleskines to offer as perks. But even if you don’t contribute, I hope you’ll come and hang out in The Cultural Gutter.