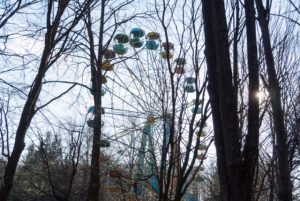 Lost Adults of the 90s and Their Children

I often feel that as a writer of speculative fiction I need to devote most of my attention to the future. But now that it’s been over 20 years since my childhood, it’s the past I’m inclined to examine closer, in the hope of revealing some patterns I wasn’t paying attention to or didn’t understand as a child.

A year after I was born, the Soviet Union collapsed. Ukraine finally got its independence but the socio-economical changes of those first years hit my parents’ generation hard. Entrepreneurship used to be illegal in Soviet Union, so when the factories and plants shut down and thousands of people lost their jobs, nobody knew what to do since there were no jobs available.

Before that, if you lived and worked in a city, you’d usually have some money — but there was nothing to spend it on because the economy was mainly geared towards flexing the Soviet Union’s muscles in the Cold War, not creating consumer goods. After 1991 everything turned upside down: more and more products became available as they were imported into the country. Yet most Ukrainian families didn’t even have the money to buy enough food, due to unemployment and the loss of their life’s savings after the Gosbank liquidation.

Those who had some plot of land to grow their own food, held on to it for dear life. A single vegetable garden often fed two to three families, and working on land was a common family activity, even if most of the adults still had their jobs.

For a long time affordable food stayed scarce. Can you imagine a crowded Black Friday line but with people waiting to buy something as basic as milk? I still remember the particular yellow color of the milk truck we would queue up to when I was about five — probably because everything else around it seemed to be various shades of grey, brown and dark green. People in the line looked tired, sad and — more often than not — angry.

Everyone blamed the government, both the new and the old one. Many felt that their politicians tricked them into poverty, so it was okay to trick the government back and do whatever was necessary to survive — even if it meant breaking the law. Barter economy, black markets and organized crime groups developed in the blink of an eye. As a child, I heard enough horror stories about human trafficking and illegal organ trade to last me a lifetime.

The overall situation seemed to be improving in 1997, when I first went to school. But I quickly started noticing that some of my schoolmates were much better off than me and children from my neighborhood. They all owned exciting and fancy stuff: colorful Polish notebooks, pencil cases with cartoon characters, rubbers that looked like flowers or fruit and had a sweet smell to them. They talked about their VHS tapes with Disney movies and their plans to visit Disneyland someday. I wasn’t even sure what Disneyland was.

But it wasn’t all as bright as my schoolmates made it look. While some of their parents managed to develop shaky small businesses or preserve some of their savings, others actually spent a lot of their time abroad, in Poland, Italy and other places, working hard at manual labor jobs. Some of them had PhDs, yet they worked as janitors or construction laborers, simply because those jobs paid good money compared to the few skilled jobs they could find in Ukraine. Later I learned that some of them had worked illegally, without obtaining any work permits or even visas, and each of their journeys to and from Ukraine was a life-threatening experience.

My Mom used to say, ‘Do you want me to be around or do you want shiny toys?’ I of course wanted her around, and so I never questioned her and my Dad’s choice to stay and work the jobs they could get in Ukraine. But I can’t blame those parents who went for it, even if it didn’t always work out well for them and their children.

So what could possibly go wrong for illegal workers apart from them being arrested and deported? Sometimes they never returned at all, either because somebody learned that they were coming back from “zarobitky” (their work abroad), and robbed, killed or enslaved them. It could also be that they met someone in a foreign country, decided to start a new family and never return to their Ukrainian family.

I also heard of stories where one of the parents managed to obtain a legal status and tried to convince his or her spouse and their children to reunite with them abroad. But the other spouse refused and so the child stayed separated forever from the one parent abroad, or at least until they came of age. Those tales of separation sounded most dreadful to me, because everybody did what they thought was best for their child, and yet the child still suffered.

And so when Margret, the editor of the anthology, asked me to choose a Ukrainian monster I wanted to write about, I remembered all those adults trying to provide for their families the best they could and yet failing to keep them together. But I was still looking for a fantasy creature who could fit into this kind of story. In our mythology, the nyavkas (or mavkas) appear as characters in tales about tragic love, and to me it always felt too limiting. That’s why I gave the Nyavka in my story “The Whitest Linen” a more complex background and her own revenge quest, so you could feel how scary and angry their kind could be.

Daryna Stremetska is a sci-fi and fantasy writer from Ukraine. Her debut short story “The Animals of Ure” appeared in Three Crows Magazine #1 and was also featured in Three Crows: Year One: Anthology of Weird Science Fiction and Fantasy. Being born in the 90s, Daryna’s childhood was mostly free of technology and full of uncertainties of the times when Ukraine was navigating the first years of its independence. Nowadays she divides her time between working in digital media for developers, running a booktube channel Beauty and Gloom, and writing short stories focused on how technology, pride and prejudices affect our lives.