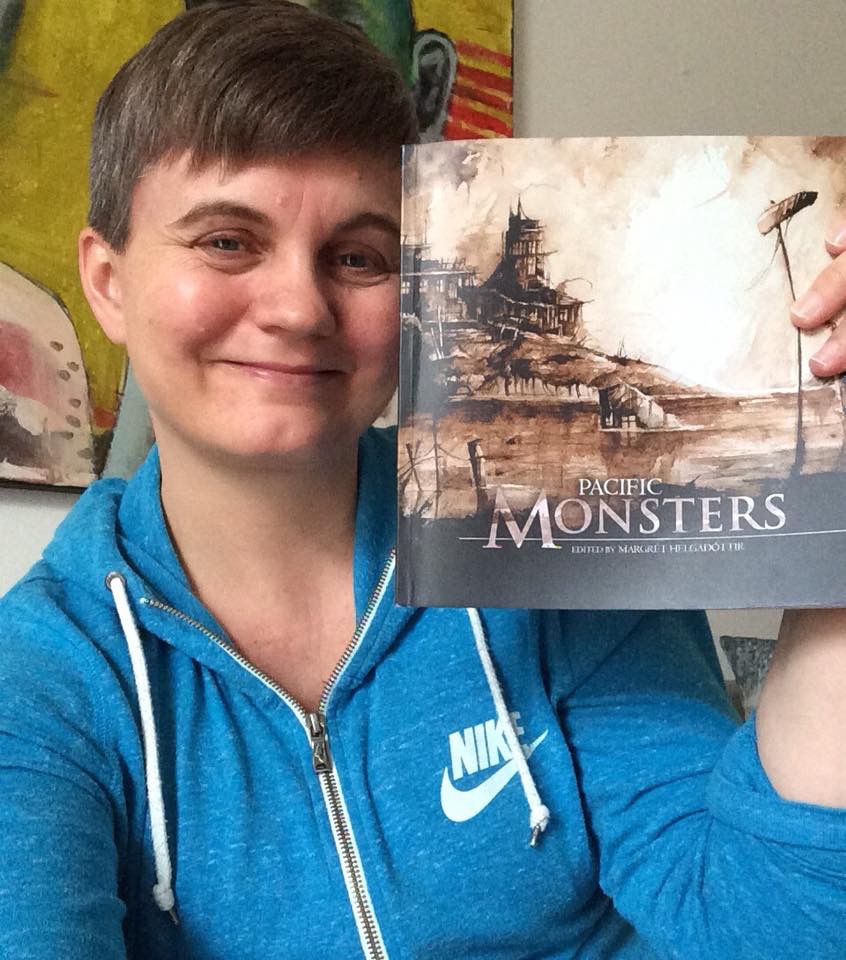 Links to the Pacific Monsters blog posts are available on the book’s page.

Pacific Monsters is out and one year of work is completed.

Pacific Monsters is the fourth volume of Fox Spirit Books of Monsters, a seven-volume series with titles published annually from 2014 to 2020. As editor it is a fun challenge to work on a book series stretching over so many years. At the same time as I have to concentrate on each book production – it takes about a year from when I start to research and plan the book until it is published – I need to bring out the word about the other volumes and work on the series as a whole. The to-do-list never seems to become shorter.

It feels like I am on an adventurous journey around the world. I am so grateful to Adele Wearing and Fox Spirit Books for wanting to publish this series. The books is a world tour exploring old myths, folklore and monsters tales continent by continent. One of the greatest blessings with working on this series is the opportunity to meet authors and the artists from around the world, and to have glimpses of the multitude of cultures and monster folklore within and between all the continents. 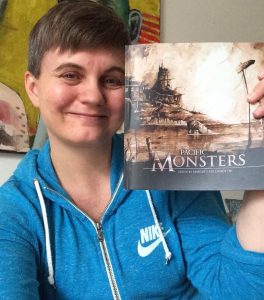 For those not familiar with the book series, one of the goals is to show all the talented artists and authors from around the world, probably many you haven’t heard about. I spend much time researching each book. I strive to have diversity in the series and the voices and topics represented. I want to have a wide-stretched geographical representation, and I encourage the authors to tell their monster tales using many genres, like horror, fantasy, science fiction, post-apocalyptic, YA, crime, and the more literary. It is amazing to see how many of the authors challenge themselves and use genres new to them, and how many of them manage to put old myths and legends about ancient monsters into a contemporary setting.

This tells me that not all of the monsters have lost their meaning and place in this world.

I am fascinated by how humans of all times, regardless of geography, culture or demography, have created monsters. No matter where you are in the world, monsters have been something to blame when bad things happen or a way to explain things like thunder and lightning. Many monsters also challenge our thoughts and fears of what will happen when we die, or the relationship between humans and animals in the wilderness.

One mission with the book series is to give the monsters a renaissance as real and scary monsters, a comeback so to speak. I have started to think that despite all the monsters crawling around our world, all the important roles they fulfil, can’t they be allowed to be just scary monsters? Can’t we just allow them to put terror in our hearts?  Do we have to categorize them all and try to make meaning of them all? These are questions I will ponder further.

It might seem that the monsters today are either forgotten or watered down and overused in the popular media. Also, only a few of them dominate the scene—vampires, werewolves, ghouls, demons, zombies—and they are almost all from Western popular culture.  Another mission with the book series is to bring all of the world’s glorious and terrifying creatures out in the open.

Some monsters are universal. You will always find the shape-shifters, the flesh-eating walking dead and the great monsters of the lakes and sea. But what is important to one culture might not be so vital to another. A signifier in the third volume, Asian Monsters, is the close link between spirits and ghosts and Asian folklore. This is very different from the second volume, African Monsters, where the stories were more about place and origin, about immigration and going home—maybe a strong witness of how much soil means to the African authors.

In Pacific Monsters we present you 14 tales of beasties from Australia, New Zealand, Antarctica, and Pacific islands like Hawaii and Guam, told by authors who are either from, have lived in, or have another strong connection to this wide stretching region. I had been warned and sadly it turned out they were right; the search for authors able and willing to contribute from the Pacific islands have been extremely difficult. It is thus with regret that we can’t give you more stories from authors on the islands. I feel however that we are still bringing you enough stories to give you a small hint about the immense folklore and diversity of monster tales in the Pacific region.

When I edited Pacific Monsters, I was struck by the strangest feeling of being at the end of the world, isolated, where the sun arrives first and you are surrounded by the vast ocean, the stars and the weirdest and breathtaking wildlife and fauna.

A large amount of the monsters the authors chose to write about, reside in water. One reason is of course the endless Pacific Ocean, being both a threat and a blessing from ancient times, and the Antarctic Ocean, a world of extremities. But, even a few of the stories from Australia, even though they take place in the bush, the monsters still dwell in fluid environments—billabongs, lakes, rivers, swamps. There are some monsters here I have truly fallen in love with, they are so hideous and horrible, they don’t sparkle or want to be our friend. They are the truest monsters.

I hope you will like this volume as much as I have while working on it.