Tales, or tails, from behind enemy lines. Stories of daring and some downright shenanigans. You can wander through wars and stumble on adventures as our brave and sneaky spies conduct their business. This collection of furry shorts brings us a broad range of spy stories and an equally ranging look at Furry literature. 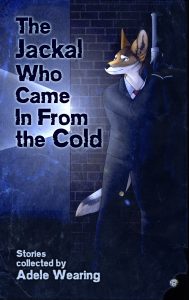 Cover Art by Tyler Arseneau and layout by Vincent Holland-Keen

Introduction by Dan Leinir Turthra Jensen
A Treacherous Thing by C. A. Yates
Survivors of the Holocene by Madison Keller
Starlight and Thorn by K. C. Shaw
The Man in the Background by Miles Reaver
Dirty Rats by Jan Siegel
The Sentinel by Will MacMillan Jones
Pay the Piper by A McLachlan
The Long Game by Neil Williamson
Agent Friendzone by Kyell Gold
Big Bird by Frances Pauli
The Off Air Affair by Huskyteer
Game of Shadows by  H. J. Pang
The Winged Fox by K. R. Green
Le Chat et la Souris by Tom Mullins

Available in print from Amazon (ignore the out of stock, it’s a quirk of Ingram and Amazon’s relationship)

Coming soon as an ebook available direct from our estore in mobi and epub, to suit most readers.