‘Some are in such a rush to die, they grab hold of 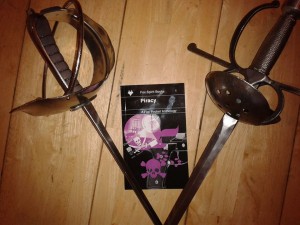 death even as they push it away.’ He looked at Safe
again, his dark eyes twinkling with a smile. A man
behind him on the floor groaned and stirred. Bill
moved closer, and Safe wondered why he wasn’t covered
in blood and shit, or tied up on the floor. ‘Every
hour Harlik will take one of you to the open deck,
hang you upside down and flay you.’ Safe’s skin froze.
‘When twelve hours are gone he’s going to give the rest
of you to the sea.’
‘You’re not making me feel better.’Said Safe. Bill
ignored him.
‘Make sure you’re not one of the twelve, you want
him to throw you overboard.’
‘Sounds preferable.’
‘Clever boy.’
‘You’re forgetting something old man. I can’t swim
tied up like this.’

from ‘Plunder’ by Francesca Terminiello