‘Stopper your ears!’ Ellie yelled. She scanned the sea, 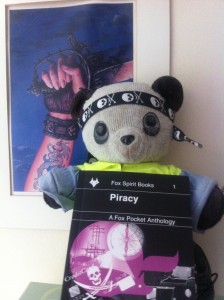 searching for further sign of their enemy, then something
moved under the water nearby, something large
which rocked the boat as it passed under, and as she
shifted her balance she gripped the hilt of her favourite
blade and made ready to make her cuts count.
And there, just off astern, a silver-grey leviathan rose
out of the depths with a deep grumbling hoot and she
barely had time to notice the Selkin on its back when
more of the thrice bedamned creatures leapt up over
the rails on all sides and attacked. Leaping harpies of
the deep that they were, the dead-eyed creatures never
considered giving quarter, just went straight for the
kill, all wicked talons and teeth and misshapen knives
that she could only think they’d stolen off some sunken
wreck once upon a long ago.

from ‘Past Lives’ by Jenny Barber