The Office of Lost and Found by Vincent Holland-Keen is officially re released today. 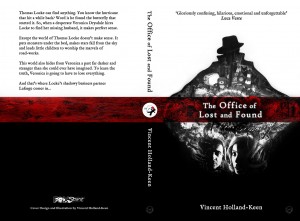 As this is a re release with no substantive changes I refer you to the kind words of some of the early adopters of VHK’s line on the absurd.

It might be fair to say this is not a book for those who like a safe predictable read. The book contains a short story in the same world, notes and sketches by the author along with the original cover as part of the back matter.